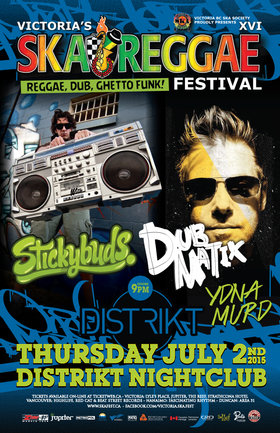 Some of the most intriguing branches of the ska family tree are the electronic ones such as dub and jungle. The Victoria BC Ska Society has always been committed to showcasing this side of the music we love, best exemplified by recent presentations featuring acts such as Gaudi, The Bug, & Walshy Fire of Major Lazer. This year's electronic offering builds upon what we have done in the past while also moving us forward.

Over the past 10 years, few Canadian west-coast DJs have accomplished as much as Stickybuds. A break technician, funky party-starter, dub-reggae selecta, and eclectic mash-up artist all rolled into one, Stickybuds has earned a residency at the prestigious Shambhala festival, while also making appearances at events such as Glastonbury (UK) and Burning Man. Fresh off two sold-out Victoria performances, we're thrilled to bring him back once more to share one of his signature sets with the Victoria Ska & Reggae Fest crowd.

Dubmatix has built himself up to be one of the marquee acts in the Ontario reggae scene, joining acts such as Bedouin Soundclash, Exco Levi, Kardinal Offishal, and illScarlett in taking their sounds to audiences abroad. However, few of them have been as celebrated as Dubmatix, a five-time Juno nominee and one-time winner. Dubmatix possesses a signature sound and style that is immediately recognizable. Just as much Phil Spector as Lee Perry, Dubmatix’s sound utilizes earth-shaking bass, majestic horn lines, and thick-set percussive grooves.

Ydna Murd is a Victoria-based drummer who performs live jungle & drum n' bass music. His online drum tutorials and performance vids have amassed hundreds of thousands of views and earned the percussionist a sponsorship from the prestigious Sonor drum company.