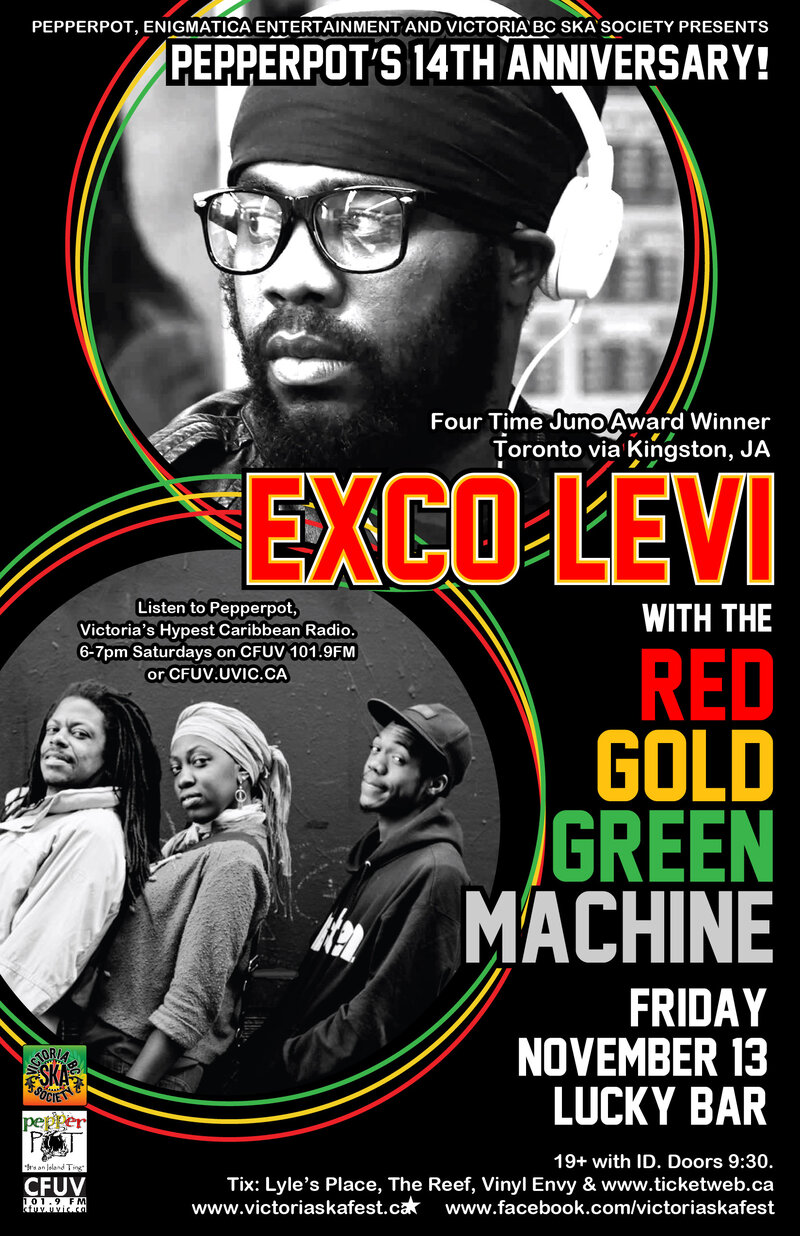 Exco Levi quickly took hold of the Canadian reggae music scene after emigrating from Jamaica in 2005. His strong writing skills complement his lyrical prowess and delivery. He continues to show his range and musical intellect through songs like the Canadian Anthem, “Oh Canada”, the nostalgic “Sweet Jamaica” and the love ballad “Same ole Words”. His songs have given voice to a nation and helped forge an entirely new style of music and rhythm that is revolutionary, fiery, scathing, loving and stinging.

His songs are just as potent on his lips as they are on his Cds. Exco’s ability to quickly engage and convince his audience makes him very appealing. This has led to him being in high demand for colourful collaborations. He has worked with top Djs and promoters worldwide. This musical “Midas” turns any song he touches to pure gold.

Exco Levi plays on major festivals throughout Jamaica, North America and Europe. Such of them include Rebel Salute, Montreal Reggae Festival and the world famous Rototom Festival in Spain. He is a four time Juno Winner and also won the Juno for best reggae performer this year in 2015.

Joining EXCO LEVI on PEPPERPOT'S 14TH ANNIVERSARY BASH will be the power trio hailing from LA and Vancouver THE RED, GOLD AND GREEN MACHINE!

The Red, Gold and Green Machine are comprised of Tonye Aganaba "Magic T" (also of Tonya Aganaba & the Foundation) - one of Vancouver's most talented soul/R&B singers and LA's Dr. Oops (aka Droop Capone) and
Nuke Lee Uss.

All three performers have an extensive performance history that includes collaborations with the whose who of the hip hop and reggae worlds. Dr. Oops has another group in his home town of Los Angeles called The BlackLoveR88rs have been touring and performing together steadily for the last 10 years.
In 2004 The Dr. Oops joined up with 70-piece hip-hop orchestra Dakah and the combination proved highly successful for both parties. Dakah was subsequently sponsored by car company Scion and sent on its first ever tour which included performances in the New Orleans Jazz Festival, Playboy Jazz Festival (the first hip-hop act ever) and South by Southwest music conference.

Tonye Aganaba aka "Magic T" considers herself a citizen of the universe, undefined by geographical, cultural or stylistic boundaries. It’s a distinction that suits her well, for a woman who has lived and performed all around the globe. Her infectious spirit and lush voice ooze with the undeniable essence of love, tenderness and togetherness, the very spirit which infects her favourite albums from childhood. As her family moved from one small town to the next, it was artists like Michael Jackson and Whitney Houston who were her steadfast friends. They not only taught her how to sing and to move, but how to live creatively, and how to express herself honestly through the universal language of music.

Overall she is talented performer and also works as a producer/manager in Vancouver at Guilt and Company booking various venues for other talented performers both nationally and internationally. She has performed at Vancouver Jazz Festival, Victoria Ska & Reggae Festival and other major one-off performances at the Commodore Ballroom and The Vogue Theatre.