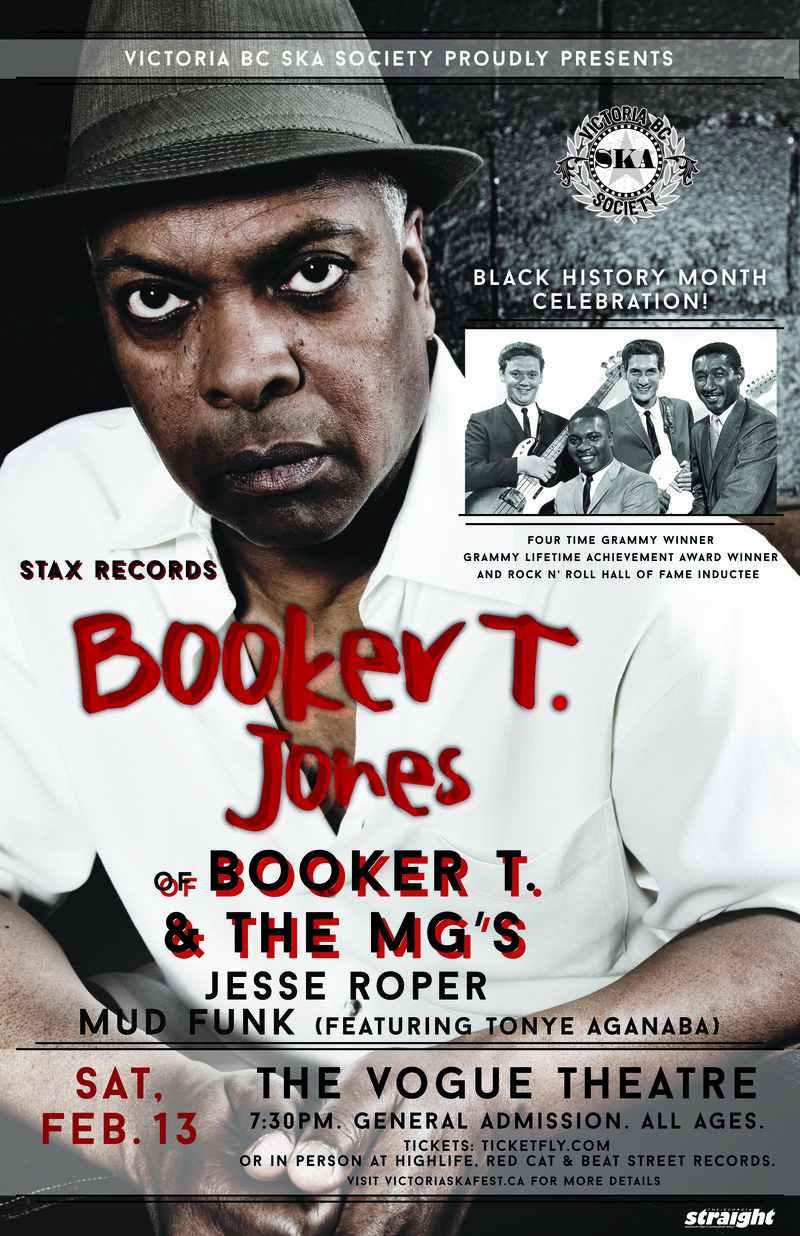 Sat. February 13th 2016 @ The Vogue Theatre Vancouver BC (All Ages)
7:30pm
$45 early bird - $49.50 regular advance
Tickets at: ticketfly.com, Beatstreet Records, Highlife Records, Red Cat Records
Presented by: Victoria BC Ska and Reggae Society
Victoria BC Ska Society members, Board and staff are thrilled to have the opportunity to experience BOOKER T. JONES - an act that represents such an important part of soul music history past and present. Booker T. Jones' work with Booker T & the M.G'S backing seminal artists such as Otis Redding and Wilson Pickett who have influenced thousands of musicians and fans in the ska/rocksteady/reggae scene world-wide since the inception of ska and rocksteady genres in the early 1960s.

Every day more excitement for Jesse Roper grows throughout Canada and beyond as his explosive live show that compliment the genuine qualitites of his music are discovered. Since his first critically acclaimed album release Son of John, Roper followed up with his much anticipated sophomore album Red Bird in early 2015. Since that release Roper has raised his profile to new heights. Before 2015 summer's festival season, he sold out The Imperial in Vancouver with colleagues Jon and Roy and Frankie. And when summer arrived he played on the Burnaby Roots and Blues Festivals supporting both Lee Fields and the Expressions and The Sheepdogs. Notably he was also a main act for Rock The Shores which featured The Black Keys and other popular bands.

Starting the guitar at six years old, Jesse soon mastered songs of heroes like Jimi Hendrix and Led Zeppelin by ear. Battling with stage fright, he was thrown out onto the stage with sweaty palms and a queasy stomach, which was quickly overshadowed by the audience's overwhelmingly positive reaction. Since that time Jesse Roper has grown into the musician he is today. He appreciates legends before him such as Stevie Ray Vaughan, but his music remains current with the organic rawness of his vocals and guitar over shadowing any preconceived stereotypes made of blues musicians. His youthful energy captivates audiences while his knock out live performance blows them away.

Will Lloyd (guitar) and Adriana Parejas (lead vocals) have worked hard to stay true to their roots when composing for this multi talented 9 piece R&B soul big band. More musical creativity and leadership come courtesy of Paul Steppin Steffes (bass) and Chris Couto (drums) whose musical inspirations come from other successful Vancouver reggae and worldbeat groups such as Giraffe Aftermath and Kutapira. Kevin Lee (saxophone & keyboards) has a strong history in funk and soul which led him to tour Asia with his previous group Milk, and Kinta Maeda's Big Brass Sounds (trombone & trumpet). Gospel inspired harmonies warm up your soul with sweet backup vocals from Marina Lagace and Alison Mcclare.

Although Mud Funk are relatively new on the scene the experience and energy of their group is extensive. Mud Funk have played several sold out performances this year in Vancouver including the TD Vancouver Jazz Festival presented by Coastal Jazz Society.

Tonye Aganaba will be our special guest performing with Mud Funk on this most historic evening. Tonye is one of Canada's most promising R&B, hip hop soul performers performing on various large festivals, charity events and high profile concerts throughout North America. Tonye Aganaba performs frequently with her band Tonye Aganaba and the Foundation and also as "Magic T" in her hip hop, reggae R&B group The Red, Gold and Green Machine (LA/Vancouver). Tonye's infectious spirit and lush voice ooze with the undeniable essence of love, tenderness and togetherness, the very spirit which infects her favourite albums from childhood. As her family moved from one small town to the next, it was artists like Michael Jackson and Whitney Houston who were her steadfast friends. They not only taught her how to sing and to move, but how to live creatively, and how to express herself honestly through the universal language of music.