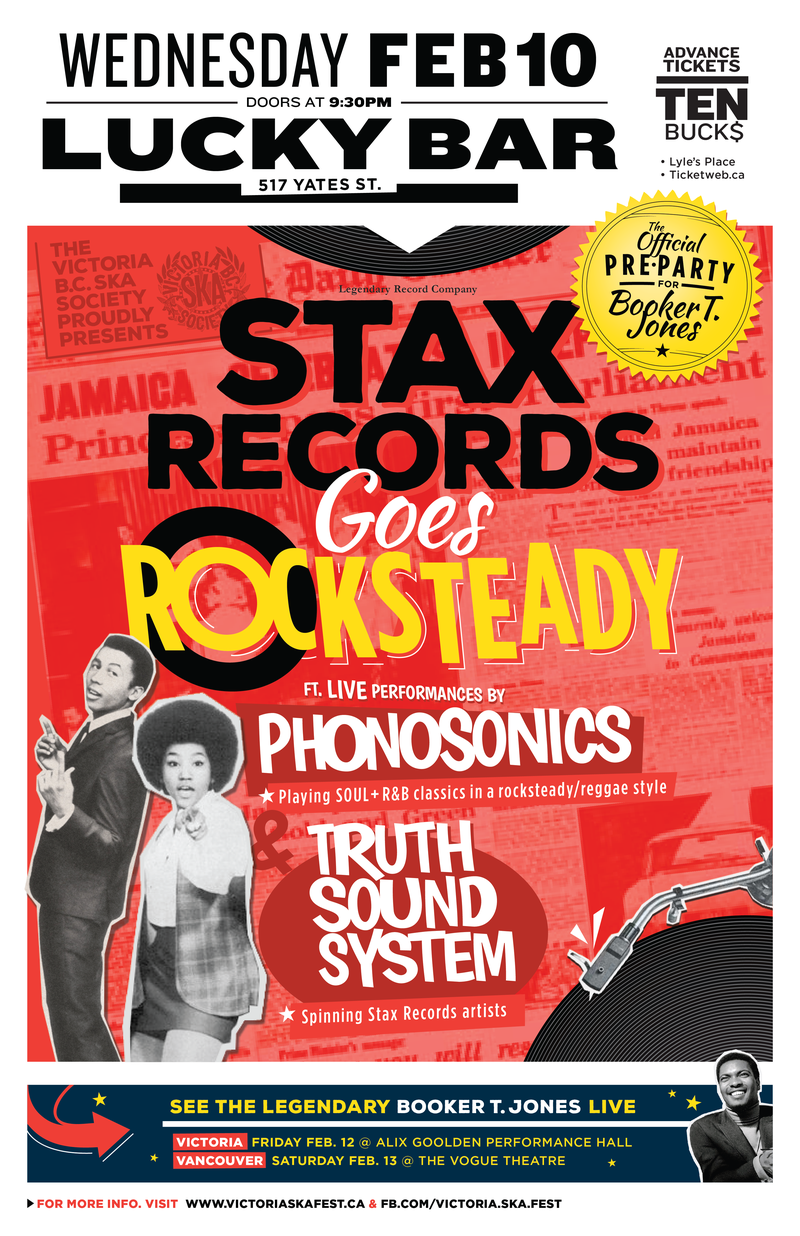 Wed. February 10th 2016 @ Lucky Bar Victoria BC (No Minors)
9:30pm
$8 - $10 advance ($8 with Booker T. Jones ticket)
Tickets at: Lyles Place, Ticketweb
Presented by: Victoria BC Ska and Reggae Society
Did the thought ever cross your mind that early Jamaican rooted music such as rocksteady and reggae music was rooted in American soul and R&B? There are many cultural and musical reasons for this but for now our goal is just to highlight this fact and to see where it takes us.

Knowing the two are connected, with the anticipation of Stax Records' Booker T. Jones coming to Victoria and Vancouver Feb 12th and 13th, we thought why not celebrate his westcoast arrival with a Stax Records showcase with a little variation? - a rub a dub/rocksteady one that is.

This idea is not a new concept but it's a concept that should be brought to light as a reminder that there were a lot of Jamaican ex-pats that came to Canada and put their own twist on both popular and underground soul & funk artists from the US. This trend was well documented through the Jamaica to Toronto: Soul, Funk & Reggae 1967 - 1974 project which included an album (created on Light in the Attic Records) and a 36 page document that talks about the movement. Kevin Plummer wrote an article just over 8 years ago called Toronto's Lost Soul & Reggae Stars Revisited which he states, "For these expatriate and immigrant artists, Jamaica lived on as a presence in their music. They fused Caribbean influences with soul and rhythm & blues." Later in the article he explains bands like The Cougars that mixed soul and rocksteady were in high demand on the club circuit in the mid to late 1960s in Toronto. Their version of the song "I Wish it Could Rain" by the Temptations epitomizes the way these Toronto musicians melded reggae and rocksteady rhythms with soul and funk to create a distinctive new sound. (Source: http://torontoist.com/2007/12/torontos_lost_s/)

For the purpose of this event it will be it will be Victoria's The Phonosonics that will perform your favourite Stax Records songs in a rocksteady/reggae style. The Truth Soundsystem (soul/rocksteady wax vault keepers and killer DJs) will guide us through the world of Stax Records on wax during interludes throughout the night.

The Phonosonics is lead by Spencer Cleave (formerly of Tequila Mockingbird Orchestra) who is the lead vocalist/guitar and sax player. He is supported by a solid rhythm section that includes Al Udell on bass, Jesse Manason on drums + Eric Leydon on keys and trumpet, and Katie Hegan on vocals.