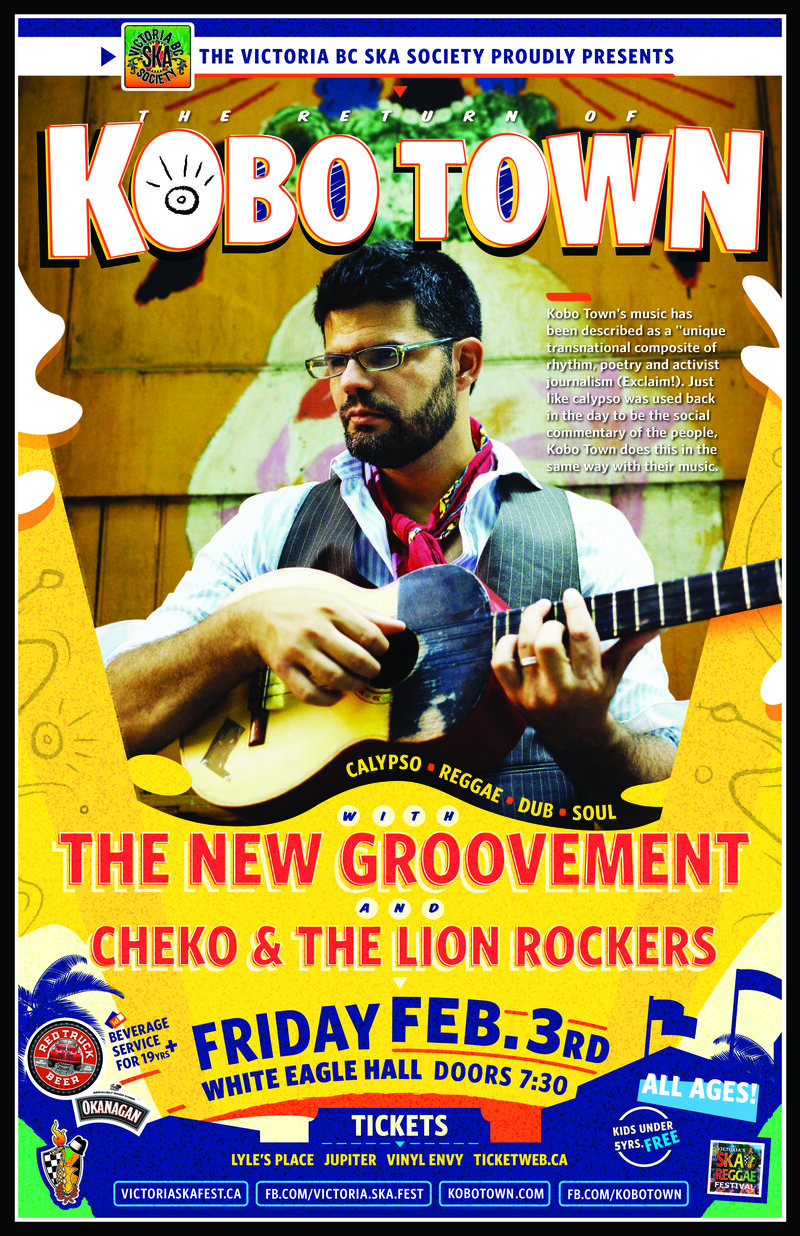 Fri. February 3rd 2017 @ White Eagle Polish Hall Victoria BC (All Ages)
8pm doors at 7:30pm
$16.50 - $20 advance
Tickets at: Lyles Place, Jupiter, The Reef, Vinyl Envy
Presented by: Victoria BC Ska and Reggae Society
This show will be all ages w/bar service to those 19yrs+ Purchasing of advance tickets is strongly encouraged. They will be available shortly from Lyle's Place, Jupiter, The Reef, Vinyl Envy & ticketweb.ca

We are excited for the return of KOBO TOWN to our Island! Founded by Drew Gonsalves, Kobo Town has brought their distinct calypso and dub inspired sound to festivals, clubs and theatres around the world. Kobo Town's music has been described as “a unique, transnational composite of rhythm, poetry and activist journalism.” (Exclaim!) In other words just like calypso was used back in the day to be the social commentary of the people, the band does this in the same way with their music. It is also the songwriting of Gonsalves that captures this traditional feel and purpose.


Kobo Town has been a favourite at Victoria's Annual Ska & Reggae Festival since they closed the festival in the summer to a sold out crowd in 2014 at the Victoria Event Centre. Following that unforgettable debut the band returned to headline the festival's free Kick Off show at Ship Point Inner Harbour in 2015.

Guests of honour for the show will be Victoria's The New Groovement that are the Island's infamous eleven-piece funk machine that blends elements of R&B, soul, and hip hop into their sets. The band has the kind of energy that guarantees you don't want to sit down. Along with their good music and energy The New Groovement have played on all of the region's largest music festivals and special events including Victoria's Annual Ska & Reggae Festival.

Rounding out the bill is Cheko and the Lion Rockers from the Cowichan Valley. Mexico's Cheko (Sergio Soto) leads this group of veteran reggae rockers from Vancouver Island. Cheko & the Lion Rockers also played on Victoria's Ska & Reggae Festival this past summer at the Rocksteady Collective Multimedia Exhibition.

from Comox Valley BC
© 2023 Victoria BC Ska & Reggae Society