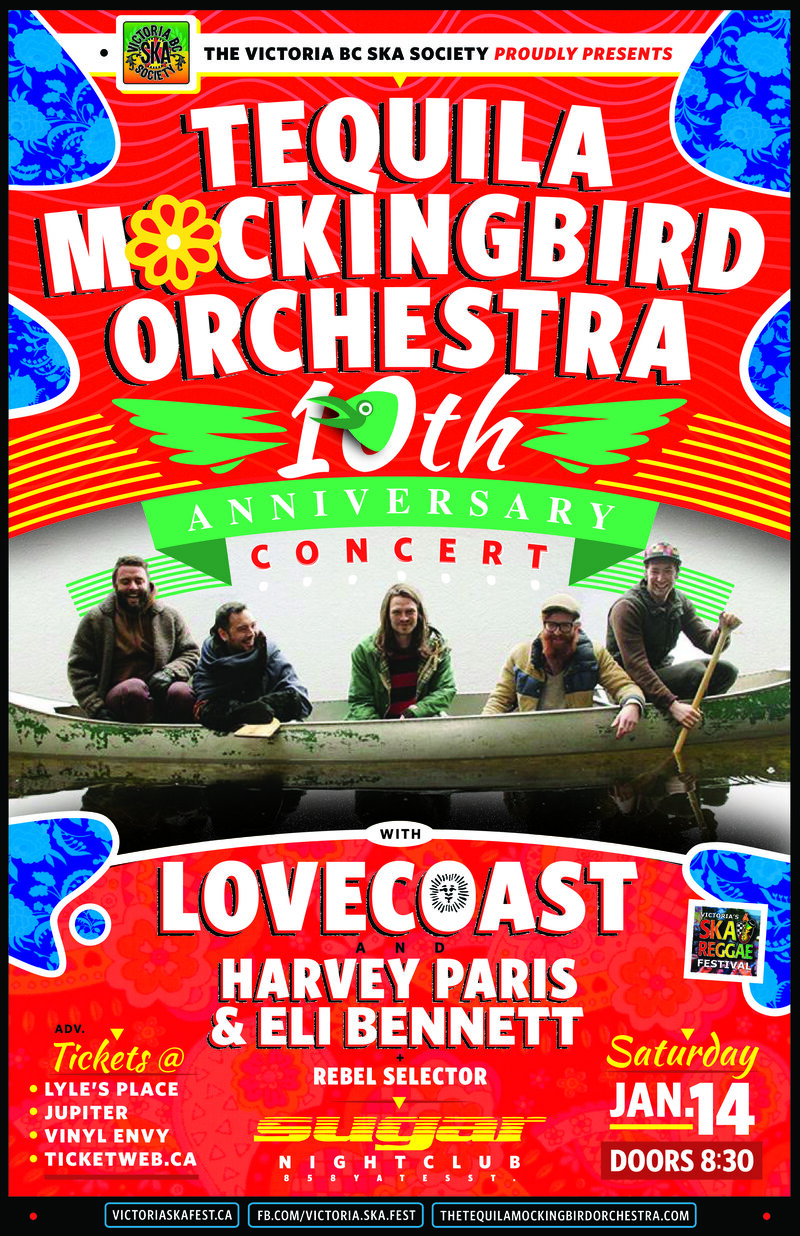 Sat. January 14th 2017 @ Capital Ballroom Victoria BC (No Minors)
8:30pm
$14.50 advance
Tickets at: Lyles Place, Jupiter, The Reef, Vinyl Envy
Presented by: Victoria BC Ska and Reggae Society
Victoria BC Ska Society is pleased to announce an exciting combination of Island artists that will bring a high level of musicianship and a beautiful blend of musical styles onto one stage. Saturday, January 14 at Sugar Nightclub in Victoria BC, Tequila Mockingbird Orchestra will celebrate their 10th Anniversary Concert at Sugar Nightclub with guests Lovecoast, Harvey Paris featuring Eli Bennett and Rebel Selector.

Tequila Mockingbird Orchestra gypsy style music mirrored the band's travelling habits. Tequila Mockinbird Orchestra have toured extensively to various places around Europe, Mexico, the US and Canada since they started in small coffee shops and restaurants ten years ago in Victoria and the Gulf Islands. Although the members now reside in various parts of Canada they are still considered a hometown favourite band to Victoria. The band has 5 full length albums under their belt which cover various styles of folk, gypsy jazz and a bit of ska. The band has played at numerous other festivals across Canada and the United States including Vancouver Folk Festival, Winnipeg Folk Festival, Calgary Folk Festival and Kaslo Jazz Festival. The band's last appearance in Victoria was at Victoria's 17th Annual Ska & Reggae Festival at Distrikt Nightclub in June 2016.

Lovecoast blends old soul, fresh pop and hard hitting grooves leave you feeling fresh and nostalgic all at once. Notably the band shares members with one of BC's best ska bands Dope Soda. After a successful 2015 gracing stages like Pemberton Music Festival 2015, Lovecoast has continued to push the envelope playing all over BC including a spot on Victoria's 17th Annual Ska & Reggae Festival playing on the same bill as The Black Seeds from New Zealand. Along with their newly released single ‘The Floor’, Lovecoast played JUNOfest 2016 and were named Band of the Month for April 2016 at The Zone 91.3 in Victoria. They also took home first place in LG104.3fm's VanCOVER contest with their rendition of the Jackson 5's "I Want You Back".

Harvey Paris featuring Eli Bennett is an exciting mix of two of Canada's most promising jazz/worldbeat musicians. Niall Harvey aka Niall Harvey has created and played with various bands in a variety of genres throughout BC. Some of these bands include Bananafish Dance Orchestra, Dope Soda, Bazooka Picnic and more. This summer Harvey backed Juno Award winner Mikey Dangerous at the Victoria Ska & Reggae Festival at Ship Point. As a session musician, Harvey has played sold out shows at both the Chan Center and the National Art Centre, and has performed at numerous music festivals across Canada.

We are also extremely excited to have Eli Bennett perform with Harvey Paris. Eli Bennett is a thirty-five-time internationally award-winning jazz saxophonist and four-time Leo-Nominated film composer. He has performed twice at the Grammy Awards in Los Angeles and shared the stage with the likes of Oscar Peterson, Hank Jones, Barry Harris, Terence Blanchard and Dave Holland. He is a two-time-recipient of the CBC Galaxie Rising Star Award from the National Jazz Awards and the Ottawa International Jazz Festival, was awarded the Vancouver Mayor’s Arts Award for music in 2012, is a D’Addario Woodwinds Artist, a Selmer-Paris Endorsing Artist, an AMT Endorsing Artist, a Yamaha Young Performing Artist, and in 2013 was awarded the Queen Elizabeth II Diamond Jubilee Medal from the Premier of BC.

Rebel Selector will play a variety of worldbeat fusion and reggae in between sets.

from Nanaimo BC
© 2023 Victoria BC Ska & Reggae Society