Thu. June 15th 2017 @ Ship Point (Inner Harbour) Victoria BC (All Ages)
4pm - 10pm
$39.50-$45
Tickets at: Lyles Place, Jupiter, Tourism Victoria, Vinyl Envy, Area 51, Fascinating Rhythm
Presented by: Victoria BC Ska and Reggae Society, Victoria Ska & Reggae Festival
Victoria Ska & Reggae Festival is proud to host the legend, the titan of American soul and R&B, BOOKER T. JONES. For over half a century, Jones has been leaving his mark on American music, through his own work and collaborations with some of musics biggest and most diverse names like The Roots, Jim James and Gary Clark Jr, to name just a few. His song "Green Onions" has been a popular staple for years and is the only instrumental song included on Rolling Stone Magazine's "500 Greatest Songs of All Time." After his unforgettable performance at Alix Goolden last year, we thought it was only fitting to bring this legend back, this time on our signature stage, in front of the majesty of the Inner Harbour sunset.

Providing direct to the legend of American music will be two titans of Jamaican music, Keith & Tex. The golden-voiced innovators of rocksteady started their journey over half a century ago and are still traveling and singing, delighting audiences around the globe with their incredible harmonies. Songs like "Stop That Train," "Don't Look Back" and "Tonight" remain some of reggae's most enduring classics, instantly recognizable and always welcome.

Joining Mr. Jones and Keith & Tex on this very special night is Victoria's own jazzy funksters, the New Groovement. The powerfully fun 11-piece is custom built to get heads nodding and rumps shaking. Their powerful horns will start the night off right, helping energize the crowd for an unforgettable evening.

Keith Rowe and Philip “Tex” Dixon were two suburban Kingston kids who wanted nothing more than to make ska music. Originally two members of a five-person vocal group, the lads were turned down by Jamaica’s top producers of the late 60s, Coxsone Dodd, Prince Buster, and Duke Reid. Dejected, the other three vocalists quit, but Keith and Tex stu... more info
Audio: Don't Look Back, What Kind of Fool
Videos: 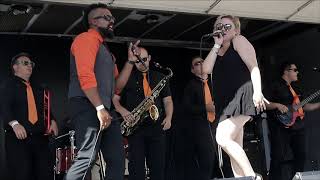