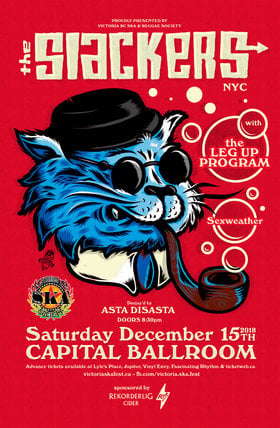 Sat. December 15th 2018 @ Capital Ballroom Victoria BC (No Minors)
8:30pm
$19.50 - $25
Tickets at: Lyles Place, Vinyl Envy, Jupiter, Fascinating Rhythm
Presented by: Victoria BC Ska and Reggae Society
Here come the kings! We're talking about Brooklyn NY's ska/reggae kings THE SLACKERS that is... We celebrated their 25th Anniversary last time they came to Canada's west coast and now we're working on their journey to their dirty 30th! But no matter what point we are in life, it's always a joy to host our long time friends.

Through The Slackers' mixed repertoire of music ranging from ska and reggae to soul, R&B, folk, and bossa nova they've managed to capture fans that span the spectrum of music with audiences of all ages. The band also plays with an aggressive edge and their songs veer in themes from the personal to the political. They're a band like no other and certainly not what one may think from a ska band from their era in the US. From their 1996 release, Better Late Than Never through to 2016 with their self titled album The Slackers, they have established themselves as America's premiere interpreters and innovators of Jamaican music.

Now after 20 years of working with the Slackers, Victoria BC Ska & Reggae Society is part of this beautiful tradition of Slackers music.

In Victoria the Slackers will be joined by two of Victoria's most exciting bands. The soul-funk behemoth THE LEG-UP PROGRAM and down and dirty power-trio SEXWEATHER.

The Leg-Up Program is unlike anything else in the land – a 17-piece monster of groove laying down soul, funk and hip-hop, all blended up with bits of rock, gospel and anything else with heart, all delivered with top-shelf musicianship and a unique big-band aesthetic. It's a wonder to watch these giant group of incredible artists come together to create their big, soulful sound and we're so excited to welcome them back to our stage!

Victoria power-trio Sexweather will be kicking off this party in style. Unbound by any genre, Sexweather comes hard with an unpredictable mix of punk, hip-hop, blues and folk, delivered with serious energy and creative swagger. Let's just say if you're looking to party, Sexweather is a band you want in your corner.

ASTA DIASTA will be keeping things moving between sets with tasty grooves to keep you bouncing.

Sexweather is a high-octane jukebox of original songs. Hailing from Victoria, British Columbia, the power trio shares the role of lead vocalist and songwriter between each member, producing a sound ranging from blues to indie, soul to hip hop and everything in between. more info
Videos: 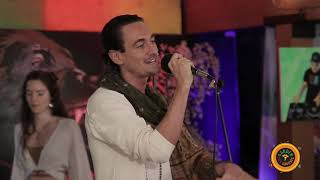