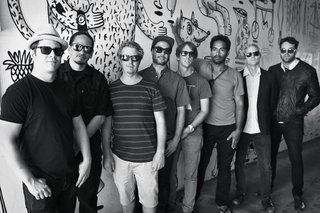 “Best Soul Album of 2009” -Dennis Cook of Jambase.com (U.S.A) - Jan. 10’
Originating from Wellington, New Zealand, The Black Seeds have carved out their reputation through platinum selling albums, a masterful 8-piece live show, and a unique sound that fuses infectious grooves and melodies with undiluted roots music. With numerous European festival tours and releases behind them, and a successful 2009 North American release, their following continues to spread quickly around the globe.
Led by the vocals of Barnaby Weir and Daniel Weetman, at its core The Black Seeds music is a boundary-crossing sound fusion of big-beat funk, dub, soul, and afro-beat, mixed with vintage roots-reggae.
Described by Clash Magazine as ‘one of the best reggae acts on the planet’, their legendary 8-piece live show brings the raw energy and good vibes wherever it goes. They now have countless sell-out New Zealand and Australasian tours behind them, and regularly perform at many of Europe’s biggest festivals.
Lyrically The Black Seeds music expresses messages on different levels. Personal triumphs and failures, the fear of love, death, apathy, and relationships, give a personal insight into the lives of the musicians. Ultimately though, their songs are always under-pinned with an underlying positivity and optimism.
“If any band ever carried the spirit of Morphine in their blood, it has to be New Zealand reggae-inspired outfit The Black Seeds. Musically the connection is subtle; vocally, Barnaby Weir exhibits the easeful, country-tinged, downtrodden-but- hopeful tendencies of Mark Sandman. Had that man not passed on a decade prior, you’d think he just reappeared some- where just south of the Shire. Sure, comparisons are awful when dealing with a group as talented as The Black Seeds. This one, however, is an honor--Morphine was a damn good band, and Solid Ground is a damn fine record.” - The Huffington Post - August ‘09
“… The Black Seeds bring harmony and good vibes where-ever they go, moving from their New Zealand base to be- come one of the best live reggae bands on the planet.” - Clashmusic.com (UK) - June ‘08
“The Black Seeds manage to play beyond the normal boundaries of reggae without compromising the music’s heart. While “Rotten Apple” has all the thump of a vintage Parliament-Funkadelic jam , “Afrophone”’s punchy horns and get- on-the-good-foot rhythm recall James Brown and the J.B.s at their peak – and the Seeds manage to pull it all off while retaining their voice. They make the blend of sounds feel absolutely natural. This is not a reggae band dropping a nov- elty funk cover into the middle of a set, this is simply Black Seeds music.” - Jambase.com (U.S.A) – Nov. ‘09

Year of the Pig
Love is a Radiation
Come to Me

The Black Seeds 'Cool Me Down'