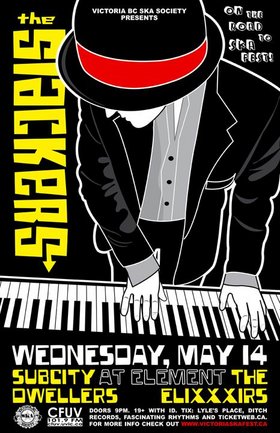 Wed. May 14th 2008 @ Element Victoria BC (No Minors)
10pm - 1:30am doors at 9pm
$16.50+ advance
Tickets at: Lyles Place, TICKETWEB.CA, Ditch Records & Cds, Strathcona Hotel
Presented by: Victoria BC Ska and Reggae Society
A lot of people are ready to see the Slackers now... It's been three long years since they came and we can't wait. The third On the Road to Ska Fest 2008 show is going to be one of the highlights of the year. Winnipeg's SubCity Dwellers and Vancouver's The Elixxxirs have been added to the bill! Tickets on sale now at Lyle's Place, Ditch Records, & TICKETWEB.CA

from Vancouver BC
© 2022 Victoria BC Ska & Reggae Society