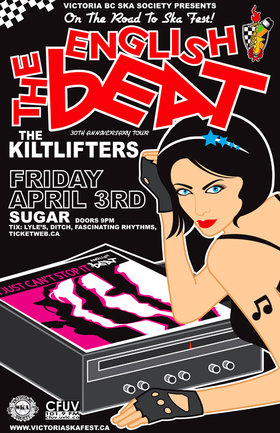 Fri. April 3rd 2009 @ Capital Ballroom Victoria BC (No Minors)
10pm - 2am doors at 9pm
$22 + advance
Tickets at: Lyles Place, Fascinating Rhythms, Ditch Records & Cds, Ticketweb
Presented by: Victoria BC Ska and Reggae Society
The English Beat formed in Birmingham, England in 1979, are celebrating their 30th anniversary with an action-packed 2009 which will include a stopover in Victoria BC, Canada @ Sugar Nightclub on Friday, April 3 for an "On the Road to Victoria's 10th Anniversary Ska Festival" show with special guests The Kiltlifters.

Led by founding member, lead vocalist and songwriter, Dave Wakeling, the band will be recording and touring extensively.

The sparkling live show includes the band’s best-known originals, among them “Mirror in the Bathroom,” “Save It for Later,” “Stand Down Margaret” and “I Confess,” and their inspirational covers of “Tears of a Clown..” and “Can't Get Used to Losing You,” as well as the hits Wakeling scored with ‘80s pop icons.. General Public, such as “Tenderness,” “Never You Done That” and “I'll Take You There”

Their most recent Western Canadian appearance in Vancouver @ The Plaza in December in 2008 was solid as well as their support acts which included Chris Murray and Outlaw Nation. That was an awesome night and we're looking forward to having them on this tour with another solid program in support of their 30th Anniversary!

All this, plus a growing number of new songs that are fast becoming firm favourites with the fans, like “The Love You Give Lasts Forever,” “How Can You Stand There” and “Said.. We Would Never Die” bring your dancing shoes, and your think..ing caps!.. The new track..s will be recorded and released in 2009, either as a series of EPs or a full album, and will include new studi..o track..s, live tracks, acoustic versi..ons, and remixes by good friends The Thievery Corporation.

“There are many perks to being in a pop group,” says Wakeling, “the money, the fame, the fast cars, and the sometimes even faster women, they can all be good, but for someo..ne to tell you that your songs have been a part of the soundtrack of their life for a quart..er century is the great..est honor.. a troubadour can ever receive.”

A part of the 2 Tone ska music revolution of the late '70s and early '..80s, alongside their stable mates The Specials, Madness and The Selecter, the Beat perfected their.. own unique brand of the Punky Reggae Party memorialized in the Bob Marley song of the same name. For Wakeling, the English Beat’s hybrid was a delightful blend of Toots and the Maytals, The Velvet Underground, Buzzcocks, The Four Tops and Van Morrison.

The English Beat never shied.. away from singing about the current topics on everyone’s lips, and with today’s social conditions.. so similar to those of the late ‘70s — reces..sion,.. depre..ssion.., unemp..loyme..nt, uncer..taint..y, war and rumors of war — their lyrics continue to resonate in a very timely manner. Often.. asked if he thought pop and politics should mix, Dave always responded wryly.., “Only if you are living on Planet Earth!”


Tickets on sale NOW at Lyle's Place, Ditch Records, Fascinating Rhythms (in Nanaimo) and on TICKETWEB.CA!