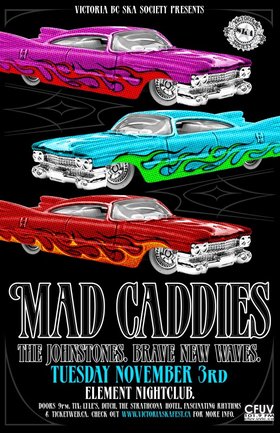 
Friday, November 3rd @ Element Nightclub Victoria BC Ska Society is proud to present one of North America’s party ska/swing/reggae/punk kings MAD CADDIES once again to the Island. After journeying the globe many times over since their last appearance in Victoria at Victoria’s 8th Annual Ska Festival playing alongside Neville Staple from the Specials and Band among talented others, the Mad Caddies are embarking on another not to be missed show @ Element Nightclub.

The Mad Caddies talents reach far beyond the boundaries of ska and punk, enabling them to throw a musical curve ball into the mix without notice. Reggae, Dixie, jazz, surf, rockabilly, country and swing are all styles in which the group is well versed and aren’t afraid to inject into their unique brand of rock.

The band has toured the U.S., Europe, Canada, Australia and Japan countless times, including stints on ..97, ..98, ..00, ..03 Warped Tours and both the Euro and American Fat Tours of 2000. Between all this time on the road, the Mad Caddies have managed to release an EP, a live record, and three other full lengths on Fat Wreck Chords.