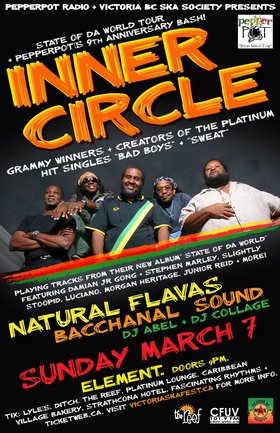 
Sunday, March 7th/2010 this Island will be treated to an unbelievable party full of reggae and dancehall when the Legendary Bad Boys of Reggae - INNER CIRCLE come to Victoria. They'll be performing hits from their brand new album titled "State of Da World" which features tracks with Damian and Stephen Marley, Morgan Heritage, Lutan Fyah, Luciano, Slightly Stoopid, Steel Pulse and more. This combined with previous platinum hits such as "Bad Boys" from the TV theme song "Cops" and "Sweat" (a la la la la long) and many more will make this night one to remember. Also don't forget Inner Circle was also featured in the reggae cult classic "Rockers" with their late lead singer Jacob Miller. They became known in the late seventies and early eighties with their hit "Tenement Yard" and then climbed back to the top of the reggae world later to win two Grammys and now they're up for their third with this latest release "State of Da World"

Opening the show will be NATURAL FLAVAS -a newly formed high quality reggae band from Vancouver made up of some of the long-time reggae and ska Vancouver veterans. The members of the band have shared the stage with other artists such as Wailers Band, Beenie Man, Culture, Israel Vibration, Jimmy Cliff and Linton Kwesi Johnson. Natural Flavas are a breath of fresh air to our westcoast reggae scene.

This show will also be a double anniversary bash (8th & 9th) for Pepperpot - Victoria's Hypest Caribbean Radio that has been bringing Victoria and Island (s) the best in dancehall, soca and reggae since its inception in February of 2001! We can't wait for this show and it's been a long time coming...

New School Reggae from Vancouver BC