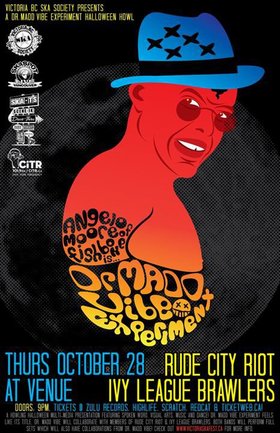 This show is a rare and special event for the Vancouver and Victoria Ska fans.

Angelo of Fishbone is bringing his side project to BC for two shows, Vancouver and Victoria, Oct 28th & 29th. The Dr Madd Vibe Experiment will feature an hour set by Dr. Madd Vibe and his band. The interesting twist comes with the collaboration between Angelo (Dr. Madd Vibe) and members of the two special guest bands on the show, Rude City Riot and Ivy League Brawlers. Members of the two local bands join the Mad Vibe Band at times and Dr. Madd Vibe will join the two bands at times during their sets.

This is the exact kind of dance / concert / happening where real musical magic can and does happen. Put it on your calendar and make it a point
to be part of the audience Thursday Oct 28th @ the Venue downtown Vancouver, BC Canada.

Dr. Madd Vibe’s work represents a link between poetry, performance art and music. Angelo Moore (aka Dr. Madd Vibe) began his career in the early 1980s as lead singer, saxophonist, and creative force behind the band Fishbone. Fishbone’s ability to blend social commentary and humor with a blazing fusion of rock, punk, funk, ska, reggae, gospel and R&B led to their recognition as one of the most notable acts in American music. After over 25 years in the biz, Moore continues his role as frontman of Fishbone, who have entered into a 3rd generation line-up. Mr. Moore has additionally collaborated with the likes of Little Richard, Curtis Mayfield, George Clinton, Rick James, Living Colour, Branford Marsalis, Burnt Sugar, the Wayans brothers, Laurence Fishburne, and Spike Lee. A versatile artist, Dr. Madd Vibe’s wildly energetic and visceral solo performances range from pure spoken word and movement to playing the Theremin and various saxophones as well as reciting poetry accompanied by the Dr. Madd Vibe Aukestra. Stemming from his experiences growing up as a "fly in the buttermilk" in the predominantly white suburbs of Los Angeles, Angelo Moore addresses “Real Racism,” “Social Corrosion,” “Spiritual Overtones,” “Family Affairs,” “Personal Satisfactions and Suffocations” and the human condition in a world gone mad. Dr. Madd Vibe brings a spiritual and cathartic dimension to his performances in the tradition of innovators such as George Clinton, Sun Ra and Jean-Michel Basquiat. Mr. Moore has taken his spoken word and sound power to the stage throughout the world. Between 1997 and 2005 he released “Comprehensive Linkology,” a book and CD; a video recording called “The Yin Yang Thang;” the “Jah Jah on the Telephone” and “Nate Poe Crasto” comic books (soundtrack included) as well as the latest Dr. Madd Vibe album, “Medicine Cabinet.” Angelo has appeared on The Arsenio Hall Show, Late Night with Conan O’Brien, The Roseanne Show, The Magic Johnson Show and was featured in the films “I’m Gonna Git You Sucka” (1988), “Phoenix Point” (2003), “Electric Purgatory” (2003), “The Still Life” (2005) and “Idlewild” (2006). Mr. Moore has performed as a poet at Lincoln Center for the Performing Arts, BAMCafe, The Knitting Factory, a Black Rock Coalition benefit concert at Galapagos Art Space, and was featured speaker of the Spitfire Tour. Most recently, he has published “Dr. Madd Vibe’s Ivy League Invasion,” a book of poetry published in conjunction with his artistic residency at Yale University (2007); is “Resident Artistic Alien” of the non-profit arts organization, LiveWired, Inc.; guest host of Indieoma.com’s Vox Verite program, and keystone of the New York-based free form ensemble, Buttafly Wranglers Present Garbage Disposal Possibilities.

Rude City Riot and the Ivy League Brawlers will each do a full set prior to the Dr. Madd Vibe Experiment set. Come early and get a good seat or spot on the dance floor.