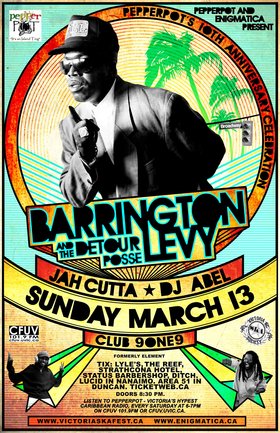 Joining Barrington Levy & Detour will be Canada's reggae alumni... A longtime favourite of the Island Reggae Massive: Jah Cutta & Determination (back with his original band) will be part of this most festive show + DJ Abel who has performed at many a Pepperpot B-Day Bash!


Victoria will be lucky to have with Jamaica’s godfather of dancehall/reggae when Barrington Levy (pronounced LEE-VEE) & Detour Posse will bless them with their presence on Sunday, March 13 @ Club 9ONE9 (formerly Element). Barrington Levy is a driving force in reggae & dancehall music and remains the perennial favourite of audiences in Jamaica and throughout the world. Always a solid voice and a uniquely expressive song style, Barrington is consistently at the forefront of the music scene, and has become the most requested vocalist in reggae music history.The classic album of Barrington's greatest hits "Broader Than Broadway," is one of the best reggae collections ever created. This was released on the hip-hop label Profile, which helped Barrington to become more recognizable in the crossover market. He came back with Bounty Killer on the song "Living Dangerously" -undisputedly the biggest reggae song of 1996, which held the 1 spot on the dancehall charts worldwide. Barrington Levy has probably collaborated with more reggae and hip hop musicians than any other performer in the genre. Any “who’s who” of the reggae/dahcehall world has collaborated with Barrington. Names include the aforementioned Bounty Killer and others including Sly & Robbie, Buju Banton, Beenie Man, Capleton, Gentleman, Vybz Kartel, Mr. Vegas, Long Beach and Slightly Stoopid. In the hip hop realm his accolades include works with Snoop Dog, Shyne, Busta Rhymes, Kardinal Offishall and The Rascalz. The show is a double b-day for Pepperpot on CFUV 101.9FM or cfuv.uvic.ca - Victoria’s Hypest Caribbean Radio and Bob Marley’s 66th Jubilee. Pepperpot has been Vancouver Island’s #1 promoter of Caribbean music since its inception in February 2001. The show has brought joy to thousands of listeners in its 10 year history. Celebrate a rare appearance of Barrington Levy; Pepperpot's 10th Year Anniversary! Proudly supported by Victoria BC Ska Society

from Vancouver BC
© 2022 Victoria BC Ska & Reggae Society