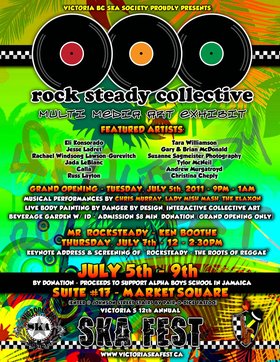 As influenced by Ska music and paving the way to Reggae, Rocksteady was created decades ago during a time of economic, political and civil unrest. The message of the music remains timeless, touching a modern audience as effectually as it did during it's inception. The Rocksteady Collective will embody the soul of rocksteady through visual art mediums, uplifting and romancing the gallery in the way that rocksteady music has captivated its audience.

There will be a gallery opening on Tuesday, July 5th, 2011, 9:30pm to 1am at Suite #17 in the Market Square lower courtyard (take the stairs on Johnson street beside Devlish Damsels).

There will be live musical performances hosted by Chris Murray, Lady Mish Mash and friends! Live body painting by Danger By Design, an interactive collective art piece and 4000 sq ft of amazing art!

There will be a beverage garden (with 2 pieces of ID)

The gallery will be host to the Rocksteady Collective art opening on Tuesday, as well as a Key Note address by "Mr. Rocksteady" (Ken Boothe) on Thursday July 7th 12-2:30pm.

The "Rocksteady Collective" Art Exhibit will be open to the general public on Friday July 8th, 4pm - 1am and Saturday July 9th, 12:30pm - 1am during the festival main event.

All programming at the Rocksteady Collective is by suggested donation (with the exception of the grand opening) with proceeds going to the Alpha Boys School in Kingston, Jamaica, which was responsible for teaching and influencing many artists such as Ken Boothe, Bob Marley, various musicians in the Skatalites and many more