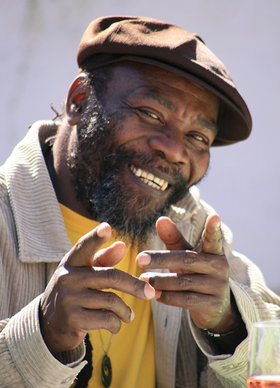 Tue. July 10th 2012 @ Distrikt Victoria BC (No Minors)
10pm - 2am doors at 9pm
$16.50 early bird adv/$19.50 reg adv. includes HST & service charge where applicable
Tickets at: Ditch Records & Cds, Lyles Place, The Strath, The Reef, Ticketweb
Presented by: Victoria BC Ska and Reggae Society, Victoria Ska & Reggae Festival
This is CLINTON FEARON AND THE BOOGIE BROWN BAND's first show in Victoria in more than 5 years, and it is a return that the VBCSS and reggae fans across the Island have been eagerly anticipating.

With a career that spans across more than four decades, Clinton Fearon is one of the most influential and widely respected reggae musicians still producing and touring. Since 1987 Fearon has lived and worked out of Seattle, but spent most of his life living in Jamaica, and it is here that he has his roots and where he honed his unique style.

Fearon is still not only recording but actively recording and producing music, with his most recent album, Heart and Soul, released earlier this year. The album features new material along with reworkings of songs he wrote during his time with The Gladiators— a famous Jamaican reggae band from the 1970s.


DANNY REBEL & THE KGB are one of Canada’s most exciting acts today. They have performed all over the country including Sled Island, Stampede, the Montreal International Reggae Festival, and both the Victoria and Montreal ska Festivals. They’ve played alongside The Planet Smashers, Fishbone, The Slackers, and many more! Their unique blend of reggae, ska, and soul have earned them fans from far and wide. They’re back again and ready for a party! http://www.myspace.com/dannyrebel

TUFF JELLY are described as “Rude raw reggae” and are one of the newer artists to emerge from Vancouver Island’s magnificent ska and reggae scene. They’ve performed alongside island favourites like Mindil Beach Markets and Brave New Waves as well as Montreal rocksteady kings The Beatdown and Canadian ska giant Chris Murray. Their sound is a blend of reggae, hip-hop, and ska. Rockas beware, Tuff Jelly is the toughest fish in the sea! http://www.myspace.com/tuffjelly

Reggae/Dub/Ska from Seattle via Jamaica Washington