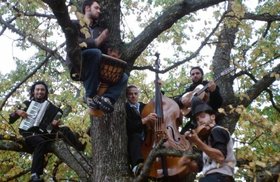 Wed. July 11th 2012 @ Ship Point (Inner Harbour) Victoria BC (All Ages)
5pm - 10pm doors at 4:30pm
FREE!
Presented by: Victoria BC Ska and Reggae Society, Victoria Ska & Reggae Festival
Fun, sun, good vibes, great bands, and all the dancing you can handle ... and all for the low, low price of FREE!

Though the TEQUILA MOCKINGBIRD ORCHESTRA now resides in Toronto, these guys still hold on to their unique Vancouver Island roots. Their unique blend of both Western and European folk music along with elements of reggae have earned them fans across Canada and the globe. They’ve performed with Los Rastrillos, C.R. Avery, and Shane Philip. Though they’ve moved on to bigger things, they always stay true to their roots.
http://www.tequilamockingbird.com/

Vancouver's BLACKBERRY WOOD plays a dynamic mix of country, folk, and world roots music. Blackberry Wood powers down the road like a caravan, with all kinds of wondrous instruments, vocal melodies and fantastically costumed characters. Playing over 300 shows since 2006, Blackberry Wood has kicked up dust in towns all over Western Canada, the United Kingdom and the United States.
http://www.myspace/blackberrywood

NATURAL FLAVAS are one of Vancouver's finest purveyors of roots and reggae music. They have had the pleasure of backing up Tosh1 (son of Peter Tosh) and Errol Blackwood of Messenjah on live performances. Last year they played back-up for rocksteady king Ken Boothe as well as Kae Sun at the festival and blew the crowd away. They have also performed along-side well-known reggae groups Inner Circle and Easy Star All-stars. Those in need of a reggae shakedown look no further. http://www.myspace.com/naturalflavasreggae

Alt-Country, Gypsy, Circus from Vancouver BC