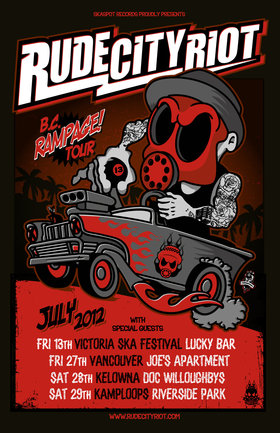 Fri. July 13th 2012 @ Lucky Bar Victoria BC (No Minors)
10pm - 2am doors at 9:30pm
$13+ HST & service charge where applicable
Tickets at: Lyles Place, Ditch Records & Cds, Ticketweb, The Reef
Presented by: Victoria BC Ska and Reggae Society, Victoria Ska & Reggae Festival
Ska Fest doesn't shut down after the Ship Point show, and neither should you! Scramble up the street to Lucky Bar and join us for a night for punk, reggae, and a whole lot more ska.

Or in Victoria at: Lyle's Place, Ditch Records, and The Reef
In Vancouver at: Highlife Records, Redcat Records and Zulu Records
Up Island: at Fascinating Rhythms in Nanaimo & Area 51 in Duncan

For those who want to see more of the festival for much better value, check out the The Full Fest Pass, available for $125+ HST

LA POBRESKA hail from LA and play a blazing mix of hardcore punk and 3rd-wave ska. They’re one part Death by Stereo and one part Voodoo Glow Skulls. Their hard and gritty sound is defined by life on the street, politics, and family. They’ve been around since 2004 and are currently recording a new album. This will be one of the best shows at the festival and will have you moshing and skanking in seconds flat! http://www.myspace.com/lapobreska


RUDE CITY RIOT are Vancouver’s own power-ska ensemble are a force unlike any other. They’ve recently completed a Canadian tour with The Planet Smashers and The Real McKenzies and have previously performed with acts like The Slackers and The Creepshow. They stand out as one of the regions best ska and rock acts and leave the crowds screaming for more. http://www.myspace.com/rudecityriot

It’s been a long time, but the MAD BOMBER SOCIETY is back for another round! Their mix of punk and two-tone madness have been on stage with acts like Fishbone, Long Beach Shortbus, and The Gamblers. They also share members with Rude City Riot and have previously been involved with The Skatomatics and Wednesday Night Heroes. Those looking for a party look no further. http://www.myspace.com/madbombersociety