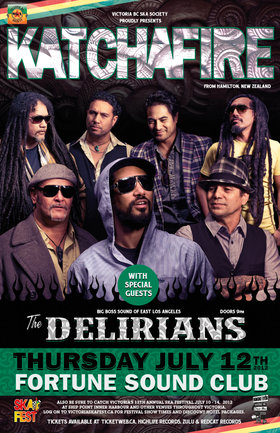 KATCHAFIRE is back by popular demand after their first appearance in Vancouver and at Victoria's 11th Annual Ska Festival back in 2010.

Reggae is one of the bloodlines of New Zealand music - which accounts for the extraordinary success of Hamilton’s Katchafire who, several years ago, emerged as the hardest working band in the country.

Experience the unique sound from a unique band, a soulful taste of reggae that soothes, kiwi driven roots flavor added with subtleties of the group’s musical influences. Katchafire continues to reach beyond their boundaries to audiences, cultures and listeners everywhere.

Special Guest: Straignt outta East LA! With their Big Boss sound, The Delirians have already made a name for themselves gaining much attention locally as well as Internationally Playing alongside bands such as The Skatalites, Derrick Harriot, The Slackers,The Toasters,Lets Go Bowling, Easy Star All stars and Bad Manners to name a few.

The Delirians play a blend of reggae, ska, and funky soul to bring you a one of a kind, original yet familiar sound that is altogether fire for your heart, and ice for your soul.

Katchafire is New Zealand’s Premier Reggae Band. Since 2002 they have recorded three full length albums, a dub remix album and a Live CD. With years of touring under their belt, the band is constantly in huge demand in New Zealand, Hawaii, Australia and around the world. They present an infusion of the roots reggae lineage with an undeniabl... more info
Audio: Mr. Flavor, Working, Say What You're Thinking
Videos:

The Delirians Formally The SteadyRock Easygroove Council.was formed in early 2007 as part of a collaboration between various Los Angeles based musicians from various L.A. based bands. Born and rasied in East Los Angeles The Delirians began playing locally In 2008 and had there debut at Chris Murrays"BlueBeat Lounge". In 2011 The Delirians Released ... more info
Playlists