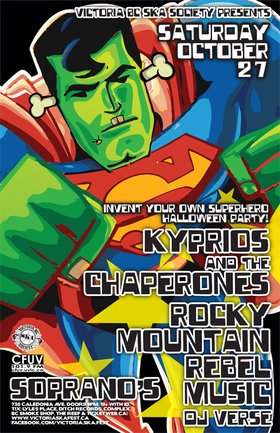 Sat. October 27th 2012 @ Soprano's Victoria BC (No Minors)
9:30pm - 1:30am doors at 9pm
$14.50 early bird/members/$16.50 regular advance.
Tickets at: Lyles Place, The Reef, Complex, BC Smoke Shop, Ditch Records & Cds, Ticketweb
Presented by: Victoria BC Ska and Reggae Society
On Halloween Weekend (Saturday, October 27th at Sopranos Bar and Grill in Victoria) Victoria BC Ska Society is howling to bring you a very special event that acknowledges the saturation of super heroes in our lives these days. At every turn we see super heroes in our entertainment media. Whether it's Batman, Superman, The Avengers or any other super heroes come back round to save us it's in your face! So we thought it would only be appropriate to have a "Invent your own Super Hero" themed show for our Halloween Rager Saturday, October 27th at Sopranos Bar & Grill. Many people have their own heroes and they don't have to be the ones we read about in comic books or watch in movies. Be inventive with this because the sky is the limit!

To celebrate the Island Massive's main Halloween event we have brought together two bands that compliment each other in the best way possible. For the first time ever one of Vancouver's most celebrated bands Kyprios and the Chaperones will co-headline this unforgettable event with Victoria's heroes of funk, ska and reggae Rocky Mountain Rebel Music.

There are many reasons why we say the Kyprios and the Chaperones are one of Vancouver's most celebrated bands. Kyrpios, the band's leader draws heavily from spoken word but is also one of the city's most talented "rappers"

He spent time in New York after road tripping with Prevail from Swollen Members. There he participated in numerous rap battles both in the cafes and on the streets of NYC. During this time he also founded and was the leader of Sweatshop Union - a popular conscious Vancouver hip hop group. Kyprios continued his solo career and worked with Sweatshop Union at the same time touring throughout North America. His hard work resulted in him winning 1st prize ($100,500) in the popular Peak Performance Project and getting signed to Sony Music Canada. After Sony merged to BMI Kyprios continued to persist with his music career. Notably Kyprios made headlines again in 2011 when the Vancouver Canucks went to the Stanley Cup finals. His rally song, "How the West was Won" was played in pubs and bars all over the city and could be heard on every news media and most importantly at the Canucks games.

Kyprios has accomplished all of the above in addition to touring with the likes of The Black Eyed Peas, Busta Rhymes, Wyclef Jean, The Roots, Rakim, Living Legends, Swollen Members and Jurassic Five. And NOW Kyprios and the Chaperones are going to come to Victoria to share their music, knowledge and all round good energy with Victoria's own Rocky Mountain Rebel Music.

RockY Mountain Rebel Music continues to increase their profile in Canada's music scene making key appearances and tours throughout the spring and summer. RMRM fans won't forget their performances opening from New Zealand's reggae/soul/funk juggernautsThe Black Seeds. And this summer the band completed another Western Canadian tour that saw them perform on three major festivals: Victoria Ska Festival; Shambhala and The Big Time Out. This Island 9-piece outfit blends reggae, rock, funk, dub, dancehall, punk, and world rhythms into a sweat soaking experience you'll want to have over and over again (after you've had a shower and some sleep).

In sum it's a party of epic proportions where the funk, reggae and ska meet hip hop, soul, jazz and more funk!

Kyprios and the Chaperones

Hip Hop/Soul/R&B/Funk from Vancouver BC