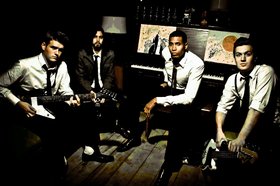 
Riding the wave after an unforgettable summer of ska, Victoria BC Ska Society (VBCSS) is proud to bring the people the 1st Member Party of the fall with a jam packed bill of music. Winnipeg is visiting our humble headquarters at the Hidden Gem featuring three exciting acts.

The first is Winnipeg's The Noble Thiefs who blend 70s punk, soul, reggae and ska into a musical trip that make ask when they'll be returning. From humble beginnings with aspirations no greater than playing to a room full of people in a friend’s basement, the band is now packing venues throughout Winnipeg, Montreal and Toronto. This show at the Hidden Gem is only the beginning of what we're confident will be a continuous musical affair.

Greg Rekus (known to the Noble Thiefs) is a punk entertainer genius also from Winnipeg. He has played at the Hidden Gem before and is excited to come back. Fans of High Five Drive will remember Greg Rekus.

Victoria's own The Blackwood Kings bring straight up ska and reggae vibes to this show. Blackwood Kings have been performing throughout Victoria with various local bands. Michael Luis - drummer of the band is also the leader of UVIC's ska/reggae club that is just getting off the ground. When you go to the party ask him about that club.

Finally Mise En Scene (tour mates of The Noble Thiefs) will round out the evening of music. Mise En Scene is influenced by 60s sou and bands such as the Clash, Neko Case, and Leonard Cohen.