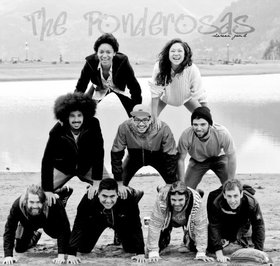 While singing, Janette and Kristie play keyboards and guitar, and are joined by a rhythm section including Ian Cardona on drum kit, Chris Couto on congas/percussion/vocals, Dave Taylor on lead guitar, Jason Smith on bass. The band takes that powerful sound and then kicks it up a level with Kevin Tang on trombone and Lucas Teodoro da Silva on trumpet/vocals.

The New Groovement is a high-energy funk band with all the elements to get you dancing! Formerly known as Victoria Dream Team, this 11-member band is taking Victoria by storm. The band is truly local, and is stacked with talented musicians from Camosun College, UVic Music School, Vancouver Island University and others (most of whom were born or raised on Vancouver Island). Known for their massive shows and great parties, they've headlined Fernfest and played numerous venues around Victoria.

The New Groovement employs their trademark formula of infectious grooves, punchy horns, sweet vocals, clever rhymes and tight percussion to get party people moving. The music has been described as James Brown meets Jamiroquai with a dash of soul and a generous helping of hip hop.

Thirsty for music that is both dangerous and danceable, refreshing as a mojito and as eye-opening as a whiskey sour. A cocktail party mix of reggae, punk rock, jazz, hiphop, and ska. This is Dope Soda.
Dope Soda formed in late 2011, a fresh concoction of six of the top jazz, rock, and Jamaican-music-inspired musicians from Vancouver Island, with membership in acts such as Current Swell, Rocky Mountain Rebel Music, The Bananafish Dance Orchestra, The Kiltlifters, and Kings Without.

from Nanaimo BC
© 2023 Victoria BC Ska & Reggae Society