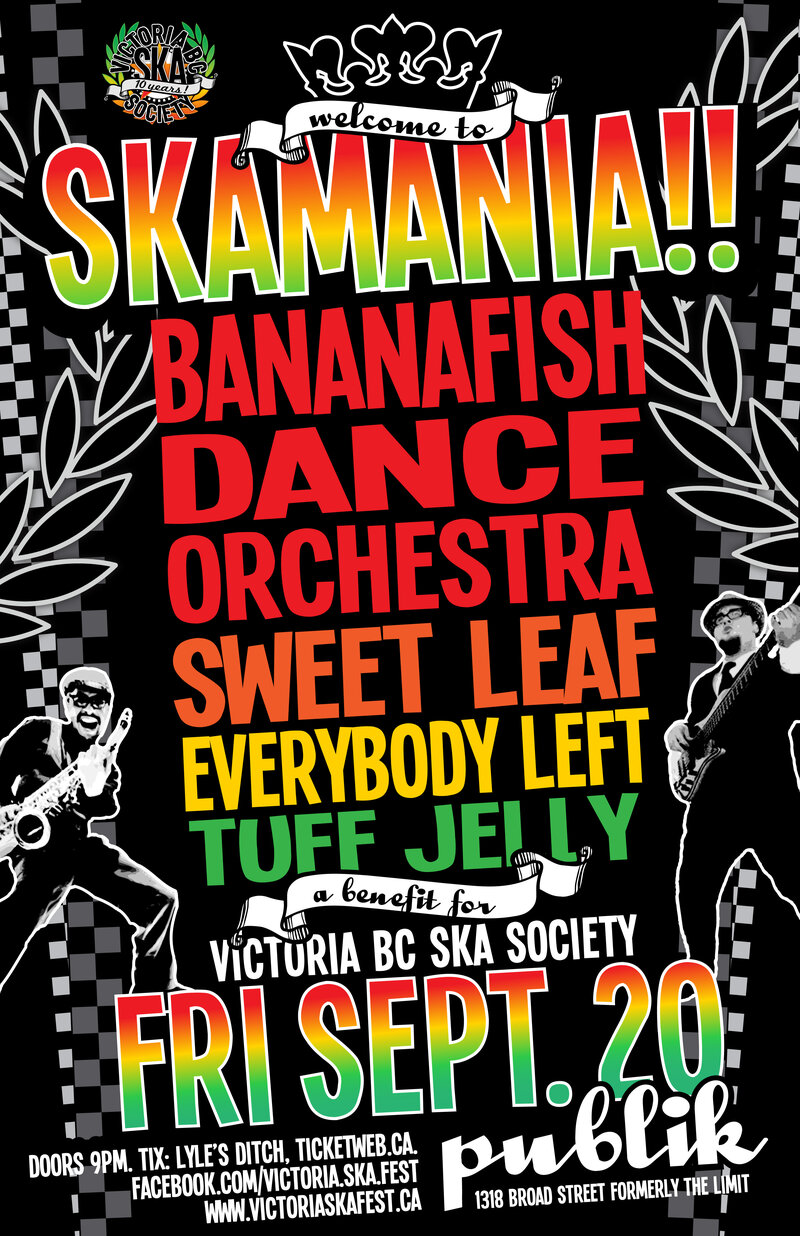 Fri. September 20th 2013 @ Publik Victoria BC (No Minors)
9:45pm - 2am doors at 9pm
$12+ in advance
Tickets at: Lyles Place, Ditch Records & Cds, Ticketweb
Presented by: Victoria BC Ska and Reggae Society
September is fast approaching and now we're ready to bring more music to the people with our latest offering called 'WELCOME TO SKAMANIA' Featuring:

This show will be a benefit to the Victoria BC Ska Society to help offset expenses with the rental and renovation costs of the Hidden Gem (Victoria BC Ska Society new official HQ) and to recover funds from a stolen bag belonging to the VBCSS on April 7th of 2013 that had $2000.00 in cash which was ear-marked to pay bands and provide float for the door at J Boog & Hot Rain at On the Road to Ska Fest at Club 9ONE9.

Victoria BC Ska Society is extremely grateful that all the bands playing event are donating their time and talent to help the Society.

So without further adieu...

Bananafish has created their own verb "RALLY" to describe their general party-tude and performance vibe on and off stage. This 7 piece Latin, reggae, funk, ska, jazz bonanza will have you drenched with sweat from the first to last note. Bananafish Dance Orchestra have been shredding up BC playing at various festivals including opening for Toots and the Maytals and Chicago Afro Beat Project at the last two Victoria Ska Festivals and performing at other festivals such as Kaslo Jazz Fest, Vancouver Island Music Fest and Islands Folk Fest. They are presently working on new material for their new album set to be released later this year.

Sweetleaf are an explosive 7 piece ska/reggae/funk party band from Victoria. With a solid rhythm section and irresistibly entertaining horn section there are no limits for this band that include current and former members of ska famila bands such as Hillside Hooligans, Crude Cultura and Blackwood Kings. Formed in 2012 Sweetleaf is quickly becoming known and one of the Island's ska powerhouses. They made their debut at Ska Fest earlier this summer opening for The Debonaires at Ship Point and have played several other unforgettable shows in 2013 including Rudefest and Bass Camp.

Everybody Left's members came together out of frustration with their previous projects. Steve Fissel & Ad-Mac came out of indie-rock band Another Day Lived and joined up with The Racket*: Part-Time Steve & Eric The Red. "We were getting anxious while attempting to make punk rock with drum machines and welcomed the addition of a drummer and another multi-instumentalist." commented the duo. The quartet began to play and write together. A decision to record themselves led to home studio experimentation and improvisation. And now, the Victoria BC group can finally check "make a CD" off the list. Everybody Left has played at festivals on the Island including V.I.C. Fest and Victoria Ska Festival the past three years. They also created a hit song "Down for the Ride" in 2010 that still enjoys regular rotation on Victoria's main rock radio station The Zone @ 91.3FM

Tuff Jelly are among the Island most soulful reggae/rocksteady/ska bands. The heavy bass and drums combined with catchy horn solos make almost anyone listening to them move their body. The band says, “We, trying to learn an old Jamaican technique to develop a combination of our favorite genres. Reggae, Hip Hop, Soul, Funk, and Jazz tracks are always in rotation, always playing. If I were to tell you in one genre, what Tuff Jelly was, I'd tell you reggae. The sound description is different from 1970's - 80's Jamaican/UK reggae though. The Aggrolites call their sound Dirty Reggae, some wouldn't classify it as reggae, when you put genres like Rock Steady and Ska into the mix. TuffJelly, this is Rude Raw Reggae.”