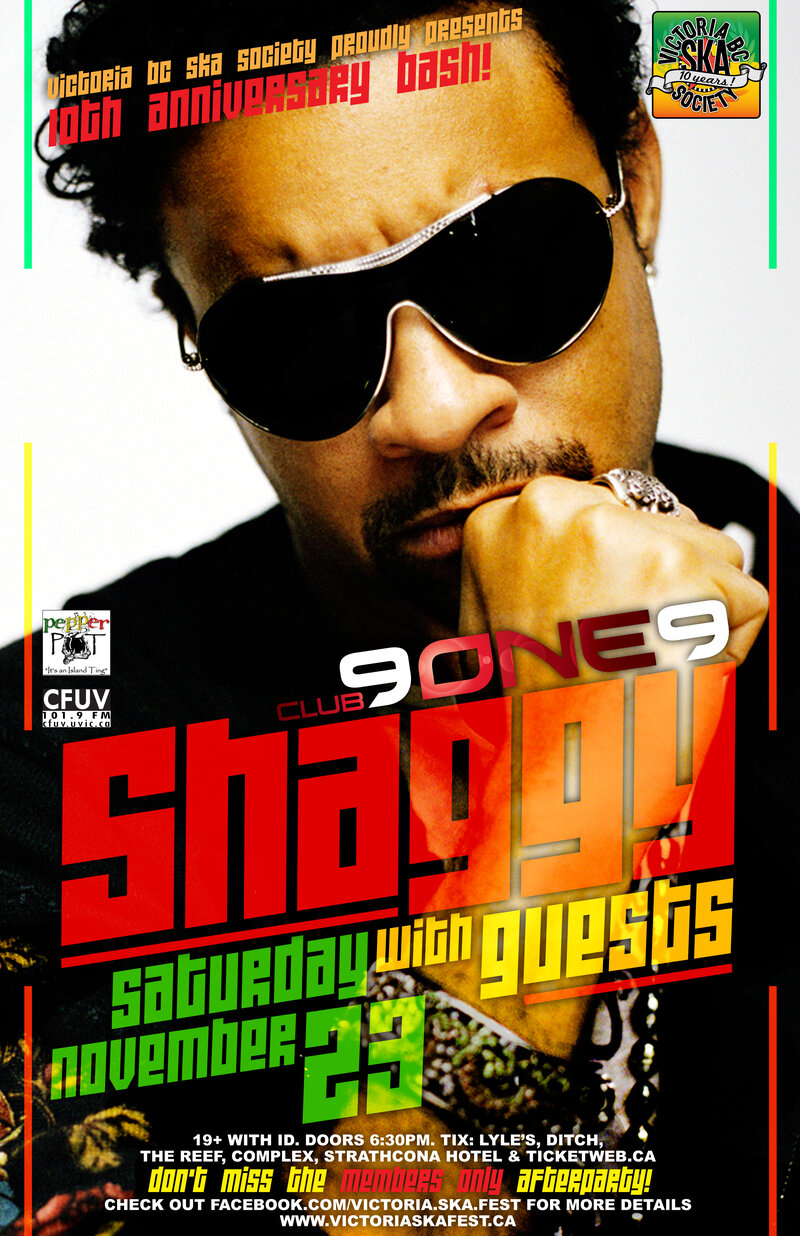 Grammy Award winning Shaggy has a wide catalog of classics dating back to his most popular works in 1993 when he exploded on the music scene with his debut album “Pure Pleasure.” His remix of the Ska classic Oh Carolina from that album was an instant hit in England and other countries. Shaggy followed up with his sophomore album “Boombastic” in 1995. “Boombastic” went certified platinum, won a Grammy Award in 1996 for Best Reggae Album and topped an impressive chart list that included the Top 40 Rhythmic charts, Hot 100, Billboard 200, among others.

With the formation of Big Yard Music Group and the success of “Boombastic,” Shaggy forged ahead and recorded his third installment “Midnight Lover” in 1997. Fast forward to 2000, Shaggy released his fourth album “Hotshot” on MCA Records label. “Hotshot” went Diamond worldwide and Platinum 6 times in the United States. Notable singles from that album included It Wasn’t Me and Angel. It Wasn’t Me received a Grammy nomination. Single Luv Me, Luv Me featuring Janet Jackson was released on the Soundtrack for the movie “How Stella Got Her Groove Back.” The album also won best selling album at the 2002 Juno Awards.

In 2002 and 2005 Shaggy released “Lucky Day” and “Clothes Drop” respectively. “Lucky Day” went certified Gold while single Strength Of A Woman made the Top 40 mainstream charts. “Clothes Drop” received a Grammy Nomination for Best Reggae Album. Thereafter, Shaggy busied himself in the studio recording his next album entitled “Intoxication.”

“Intoxication” was released in 2007 and debuted at number 1 on Billboard’s Top Reggae Albums chart, was nominated for Best Reggae Album at the 51st Grammy Awards in 2008 and was the number 1 download on UK iTunes Reggae chart. The first single, Church Heathen, from the album received rave reviews. The song peaked at number 1 on various music charts and won the Best Music Video at the International Reggae and World Music Awards in 2008. The second single Bonafide Girl also made its way to number 1 on music charts. That same year, Shaggy recorded and released single Feel The Rush which was used as the original anthem for the UEFA Euro Cup. The single was featured on various charts throughout Europe and India.

Undaunted by the success of his business ventures and his music, Shaggy has always lived on the premise that “to whom much is giving, much is required.” With this belief, Shaggy took on the role of philanthropist. What began as donations of medical equipment and visits to the Bustamante Hospital For Children to distribute gifts during the holidays, paint rooms, donate beds and creation of a garden, gave birth to the Shaggy Foundation. Developed in 2008, Shaggy recruited business associates, fellow recording artists and sponsors to assist in hosting an annual charity event in which all proceeds are donated to the hospital to help defray the cost of medical equipment. To date, the Shaggy Foundation has been instrumental in raising over $85 million (JMD = $1 million USD) for the hospital.

Shaggy's latest album produced/presented by Sly and Robbie to be released Sept 24th 2013 features some of the best up and coming reggae artists in Jamaica right now including Chronixx, Konshens and Taurus Riley as well as more established and popular artists such as Damian Marley, Beres Hammond and Cocoa Tea.

We invite you to join us for our 10th Anniversary Bash to commemorate the creation of the Victoria BC Ska Society.

Members of the Victoria BC Ska Society can attend our official after party at Hidden Gem studios! Cost of memberships are $20 annually and they are good from the time you sign up for one year.