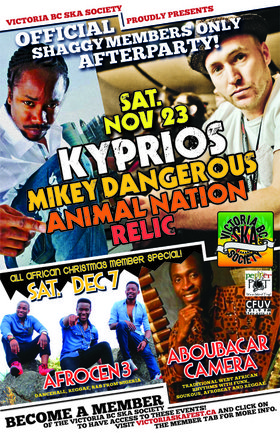 For the first time in more than 5 years we are proud to have Montreal's dancehall/reggae sensation MIKEY DANGEROUS return to the Island! Since Mikey's last Island appearance playing with The Beatnuts he has been performing on various festivals and shows throughout coast to coast.

Kyprios is back touring BC on his recent Ghost bus tour with guests Animal Nation and Relic. Kyprios has toured all over North America solo and as part of Sweatshop Union with the likes of The Black Eyed Peas, Busta Rhymes, Wyclef Jean, The Roots, Rakim, Living Legends, Swollen Members and Jurassic Five to name a few. He has made numerous appearances in television and film and is one of the voices for Michael Jordan’s website jumpman23.com. Kyp has won a Jesse for his musical work in a play called “Cranked”, has licensed music to MTV’s “The Buried Life” and continues to write for/with many artists. He still writes poetry and is eagerly anticipating the release of his next major project The Midnight Sun. 2011 saw Kyprios playing inside Rogers Arena during the Stanley Cup Finals with his hit This Is How The West Was One also playing the The Grey Cup Street Festival, Live At Squamish, Vancouver 125, Tedx and Shambhala. He is currently working on promoting a musical that he co-wrote entitled Ash

For almost a decade, Montréal reggae artist Mikey Dangerous has been putting his own unique twist on the Canadian dancehall scene. Combining energetic performances with a smooth but dominating vocal flow, Dangerous has long been close to crossing over into mainstream territory. Despite a large and loyal fanbase and a ton of critical acclaim, he’s not quite a household word just yet. But don’t bet against him — this is one hard-working performer. Born and Raised in Kingston, Jamaica, Dangerous has kept up a prolific recording profile, releasing an impressive amount of singles, both digitally and on 45-RPM 7" vinyl. His recordings have also been featured in a number of compilations around the world, from Jamaica to England. In 2008, Dangerous won a Juno Award in the category of Reggae Recording of the Year for his single “Don’t Go Pretending”
Chris Morin - PLANET S - Saskatoon's City Magazine | Est. 2002 | Free Bi-Weekly

Hip Hop/Funk from Vancouver BC

Hip Hop from Whistler BC