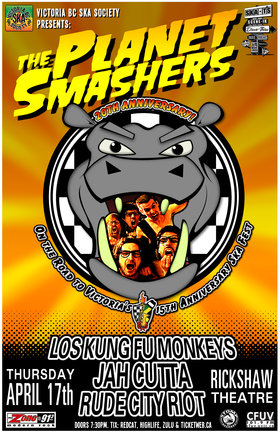 Thu. April 17th 2014 @ Rickshaw Theatre Vancouver BC (No Minors)
8pm - 1am doors at 7:30pm
$19.50 + advance
Tickets at: Zulu Records, Soundhouse Studios: Vancouver's Premier Rehearsal Studio, Highlife Records, Ticketweb, Red Cat Records
Presented by: Victoria BC Ska and Reggae Society
Twenty years has come and gone and The Planet Smashers - Canada's ska kings have stood the test of time representing the genre throughout Canada and beyond for all that time. In terms of touring, not many indie Canadian bands come close. The Planet Smashers have headlined countless tours in North America, 8 European tours, been included on 5 Vans Warped Tour as well as a Japanese tour in 2002. They have toured with such acts as AFI, the Toasters, Sick of it All, Billy Talent, Rancid, Mustard Plug, Simple Plan, Samiam, The Aquabats, Mighty Mighty Bosstones and countless others. In addition to spreading the message of ska and reggae to the world, the band has supported numerous other bands through Stomp Records (the lead singer's longtime ska/punk/reggae record label based out of Montreal.

The Planet Smashers rank among North America's premier ska bands. Their repertoire of original tunes and energetic stage shows have catapulted them into the forefront of the underground music scene in Canada. A concert favorite from coast to coast, they regularly play to capacity crowds that number in the thousands. Their first three records have s... more info
Audio: My Decision, Explosive (featuring Neville Staple of the Specials), She's Late
Videos:

After countless tours and festivals in Mexico, United States, Europe, UK, and Canada. Sharing the stage with international and mythical acts such as NOFX, Dropkick Murphys, The Toasters, Voodoo Glow Skulls, The Aggrolites, Fishbone, Panteon Rococo, Moby, Underworld, The Addicts and many, Many More. Los Kung Fu Monkeys are getting ready this 2011... more info

For the last 20 years, there has been a rumble in the lion's den. Finally, Jah Cutta has decided it's time to roar. Early successes overseas lead to his home release of his first full length album on Union 2112 Records "If It Wasn't Jah". Renowned for his ferocious live performances, Jah Cutta has shared the stage with some of Reggae's greatest ent... more info

Review of RCR debut LP on Stomp Records "Nuthin But Time". “Ska tends to be typecast, modeled to a great extent on the early 80s Two Tone look and sound from England, which makes Rude City Riot different. Sure, the horn arrangements and rhythms that are ska trademarks are here, but the album starts with a rock and roll urgency that suggests Ru... more info
Audio: Don't Go Away, Shots and Pills, 25 Years
Playlists