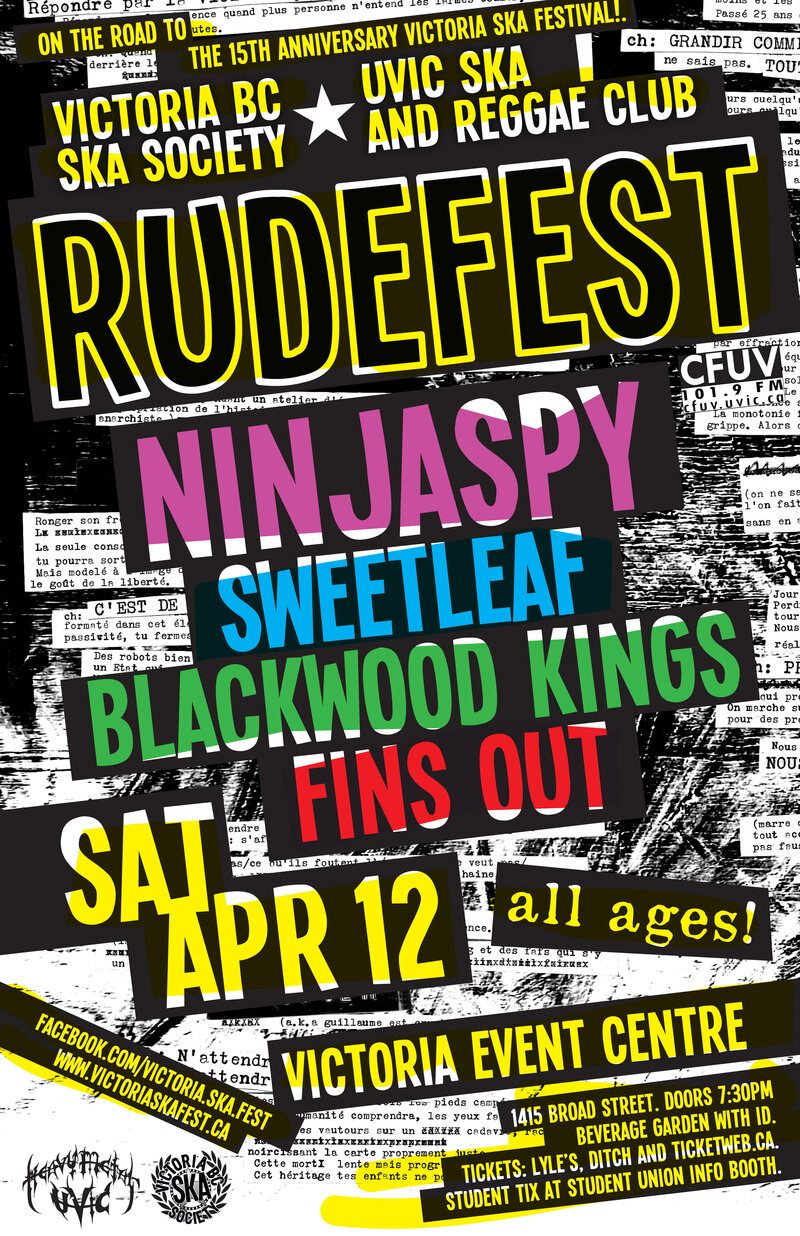 This is the second of FOUR April shows designed to celebrate being "On the Road to the 15th Anniversary Victoria Ska Festival."

Ninjaspy knows how to put on one hell of a show. Just ask anybody who's seen them on one of their many cross-country treks. A true fusion band, Ninjaspy mixes the dance-ready beats and thick grooves of ska, reggae, and funk with the thrashing aggression of hardcore and metal. The mainland group, comprised of brothers Joel, Adam, and Tim Parent, possesses one of the most diverse sounds to ever pop up along the west coast.

Their unique musical output has allowed them to share the stage alongside modern metal icons such as Protest the Hero, Coheed and Cambria, and Periphery, while also making appearances at such events as the 2012 Victoria Ska Festival. Their 2007 full-length album Pi Nature received universal critical acclaim, and their most recent release, 2013's No Kata, an experimental musical journey through metal, drum n' bass, and dub, is accompanied by a graphic novel. Both releases were produced by Garth Richardson, known for his work with Red Hot Chili Peppers, Rage Against the Machine, and Rise Against among others.

Ninjaspy's performance at Rudefest will see the trio expand to a five-piece, with the addition of trombonist Mike Kayser and trumpeter Cole Graham, known for their work with Vancouver groups such as Whiskey Chief and Whitey. Also, with Ninjaspy bringing a heavy edge to this show, we're thrilled to announce a partnership with Heavy Metal UVic for this event.

If you like the heavy ska fusion of bands such as Leftover Crack, Voodoo Glowskulls, and Fishbone, Ninjaspy is for you. See ya in the pit.

By popular demand, SweetLeaf is back for Rudefest 2.0!

Victoria’s SweetLeaf formed in November 2011 when singer-guitarist Chris Jones responded to an online ad. “Victoria's ska scene and music scene in general is so supportive of new talent,” says Jones. “I love the bands in this town and all the people that come out to move their feet.” After six months of rehearsals, SweetLeaf made its debut at an underground warehouse show thrown for members of the Victoria BC Ska Society, a non-profit organization that produces the yearly Victoria Ska Festival. Since then, the group has honed their live performance to be sharp and energetic.

“Man, now that the days of making money from recordings are over, a live show is a band's bread-and-butter,” explains Jones. “We want to be the [band] you leave talking about, waiting for our next one.”

When listening to SweetLeaf, who wields a three-piece horn section, one can sense inspiration from the upbeat 90’s ska sound of bands such as Reel Big Fish and No Doubt. But as Jones contests, SweetLeaf is more than just a ska band. “We’ve never had any boundaries in what genre of music moves us. Hip hop, funk, ska, punk, jazz, soul, bluegrass - really anything that's original.” http://www.facebook.com/Sweetleafmusic

Just two years into their evolution, Blackwood Kings is one of the more unique bands to pop up in the Victoria scene. Building upon a foundation of Jamaican genres such as ska, reggae, and dub, Blackwood Kings also incorporate influences from styles as diverse as punk, progressive rock, funk, hip-hop, and metal.

Things are just getting started for this young, progressive dub quartet.

The idea for the Fins Out was first put forward at the end of the 2009 summer when friends Derek Myles and Rob Thomas were chilling in whistler for some late-summer wakeboarding. In the evenings after riding they were listening to different punk and ska songs on Youtube and thought "Man it would be sick to start a punk band." Several months later, the first Fins Out songs were written in a cheap Bali hotel. The sound was punk but also surfy, and so they called it surf punk.

Today, the Victoria punks have been quickly making a name for themselves in the local scene. The bands philosophy is like a big fast loose fins-free surf turn, basically the way the members like to live their lives: fast, loose, and care free. Fins Out!

This event is proudly brought to you by The Victoria BC Ska Society, UVic Ska and Reggae Club, Heavy Metal UVic, and UVic Student's Society.