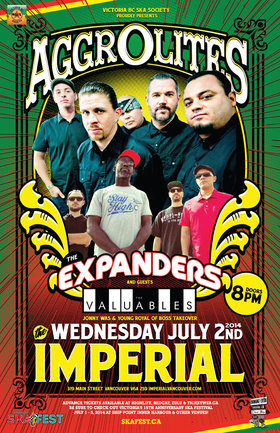 Event Archive - THE AGGROLITES RETURN TO VANCOUVER AT THE IMPERIAL!: THE AGGROLITES, The Valuables, The Mean Threes, Jonny Was, Young Royal of Boss Takeover

Wed. July 2nd 2014 @ The Imperial Vancouver BC (No Minors)
9:00pm doors at 8:00pm
$19.50+
Tickets at: Highlife Records, Ticketweb, Red Cat Records, Zulu Records
Presented by: Victoria BC Ska and Reggae Society
Victoria BC Ska Society proudly presents The Aggrolites, The Valuables, The Mean Threes, Jonny Was and Young Royal of Boss Takeover - Wed. July 2nd, 2014 at Imperial Vancouver - one of Vancouver's hottest new rooms! This show is being produced in support of Victoria's 15th Anniversary Ska Festival which will be happening in Victoria BC - July 1st - 5th, 2014.

The combination of all of these bands on the same bill is rare on Canada's westcoast so when it comes together you have gotsta come out! Note: The Mean Threes have replaced The Expanders as of June 24th, 2014.

There are singers, guitarists and even entire bands who will say that if not for so and so if not for the music and classic albums of this artist or that artistthey wouldnt exist. In the case of the Aggrolites, thats not just hyperbole. If not for the great Jamaica ska singer Derrick Morgan, the Aggrolites would quite honestly not exist. The band w... more info
Audio: Love Isn't Love, Countryman Fiddle, Jimmy Jack

The classic sounds, the retro tones, and the vintage look of the Valuables are tearing up dance floors all over the Pacific Northwest. Bringing you a blend of reggae and soul, their debut self titled EP is already getting airplay in Vancouver, British Columbia, Los Angeles, California, Montreal, Quebec, Seattle, Washington and London, England. Th... more info
Playlists