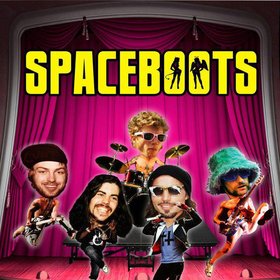 SpaceBoots
You wanna Party? So does SpaceBoots. They'll melt faces with their roaring-riffs and tight bands - it's gonna be a night that never ends when these boys hit the Event centre stage.

Def 3
2 time - WCMA "Rap Recording of the year" Nominee, Def3, is a Canadian hip hop artist who has gained International notoriety with his music playing over 100 shows a year around the globe, showcasing at festivals such as SXSW, MIDEM, 2010 Winter Olympics (Sask. Pavilion Headliner), JUNOFEST, NXNE, CMW, Breakout West and more. His contagious songs are amplified by his highly energetic & interactive performance. His newest album "WILDLIF3" produced by Factor set to be released June 24th on URBNET.

Ganjo Bassman
After 5 years of playing various genres with different groups, Ganjo decided to go solo and created the "2012" project releasing an E.P. The music uses killer bass lines, some skanky guitar with a touch of hip-hop rhythms to create a unique blend which Ganjo refers to as "Rock-Reggae-Hop". This E.P is a sample of Ganjo's profound, yet simple style which also currently resides in more that 50 other songs. Ganjo toured in support of his EP release across Mexico, Canada, Europe, England, Italy , France , Spain joining tours & festivals in support of Ky Mani Marley, The Wailers, Alboroise, Gondwana & More.


Admission is through purchase of a Full Fest Pass or you can purchase a double ticket to this show and Barrington Levy/Fishbone for $52.50 on ticketweb.ca