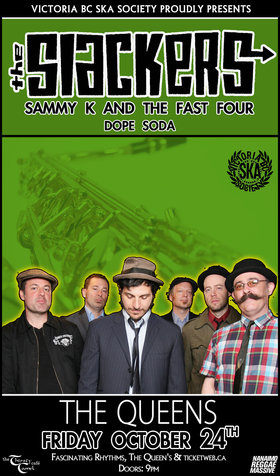 Fri. October 24th 2014 @ The Queens Nanaimo BC (All Ages)
10pm doors at 9pm
$19.50
Tickets at: Fascinating Rhytms, The Queens, Ticketweb
Presented by: Victoria BC Ska and Reggae Society
Last year The Slackers played their first ever concert at The Queen's - Nanaimo and there was a line-up all the way down the street past the A&W near the venue. If you want tickets to this show get on top of it early and book your time off.

Thanks to Thirsty Camel Cafe near to the venue for sponsoring the show!

Sprung from the suburban wasteland of NJ, exported to the concrete jungle of Brooklyn, and now drunk on LA sunshine comes the mess that is Sammy Kay. After spending his younger days on tour working for Westbound Train, The Slackers, The Skatalites, King Django and many others, Sammy finally threw down the merch bin and picked up a guitar to pou... more info

Thirsty for music that is both dangerous and danceable, refreshing as a mojito and as eye-opening as a whiskey sour? A cocktail party mix of reggae, punk rock, jazz, hiphop, and ska? This is DopeSoda. Dope Soda formed in late 2011, a fresh concoction of six of the top jazz, rock, and Jamaican-music-inspired musicians from Vancouver Island, with ... more info
Audio: Distraction, Strangers, Bullets
Videos:

Dope Soda at Club 9ONE9: What We Do & Bullets