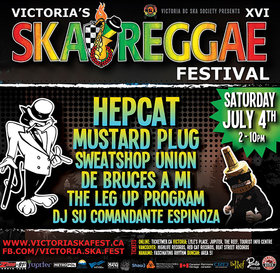 Formed in L.A. at the tail end of the eighties, Hepcat are tried and true veterans of the North American ska scene. Guided by a reverence for the original reggae, rocksteady and dancehall of Jamaica, the group dominated the international ska circuit through the 90s, releasing numerous beloved albums, touring relentlessly through North America and Europe, and participating in festivals across the globe. It was through this dedication that Hepcat established an unwavering and expansive fanbase. While members have unfortunately passed away or left the group, the last few years have showcased a reinvigorated Hepcat. Led by dual vocalists Greg Lee and Alex Desert, Hepcat continues to prove that they’re one of the most consistently impressive ska bands today. While not known extremely well outside of diehard ska circles, Hepcat’s dedication to quality tunes and their cult fan base have proven them to be a worthy choice as one of this year’s Victoria Ska & Reggae Fest headliners.

Mustard Plug are your brain on ska. As one of the fiercest bands to explode out of the nineties ska-punk rush, the Plug have always set themselves apart from the rest with their DIY ethics and fun-fuelled intensity. Coming up in a Midwest scene that had little to no experience in ska music, the group applied their considerable work ethic to spark a 20-plus-year exodus that has seen them release seven acclaimed albums, tour the globe (including Japan and South America), and bring their aggressive yet positive blend of ska, punk, and hardcore to legions of fans. As trombonist Jim Hofer puts it: “We may have some messages in our music, but essentially we just do this because we love it and we want people to lighten up and have fun.”


Canadian hip-hop heavyweights Sweatshop Union, one of the hardest working ensembles to ever emerge from British Columbia, have been making righteous, politically charged music for over a decade but on their newest album Infinite (released May 28), they’re ready to really enjoy themselves.

The 6-member crew took their time with this album, spending a year to gather sounds and lyrics, whereas previous records have been completed in mere months. It bridges the gap between conscious music and fun party jams, exploring heavy themes but it’s also built for kicking back and vibing. The group believes that the record’s strength lies in this dichotomy.

The reggae and ska community knows no borders, and if any band is a testament to that, it’s Colombia’s De Bruces a Mi. The project began in 1999 as an earnest group of friends looking to involve themselves with and grow within the reggae music they loved. Taking equal inspiration from both Jamaican legends and the music of their homeland, De Bruces a Mi specializes in an eclectic mix of ska and reggae with salsa, calypso, and the champeta music ative to their region of Caribbean-coastal Colombia. With their unique sonic blend and devotion to the guiding ethos of reggae culture, De Bruces a Mi are certainly one of the brightest talents in the scene today. De Bruces a Mi are the fifth Colombian band to take the Victoria Ska & Reggae Fest stage, which is just another step in our mission of showcasing one of the best ska/reggae hotbeds in the world.

The Leg-Up Program is a Victoria BC super-group that borrows members from some of the city’s hottest bands of past and present. Members of Skafest staples like Rocky Mountain Rebel Music, Everybody Left, Dia-Nos, & SweetLeaf can be found toting instruments and mics at an LUP show. Born at beach jams and late-night parties, this musical collective can feature over 12 singers, rappers, and instrumentalists on stage at the same time. Their blend of soul, hip-hop, and reggae - all with an in-your-face punk energy - has quickly given this group a reputation as one of Victoria’s hippest acts.

DJ Su Comandante has evolved to be one of the most diverse DJs spinning reggae, dancehall, Latin and reggaeton on the west coast of Canada. Now residing in Vancouver, his musical choices also mirror his beliefs in revolution and social justice.

Soulful Indie LeftCoast from Victoria BC