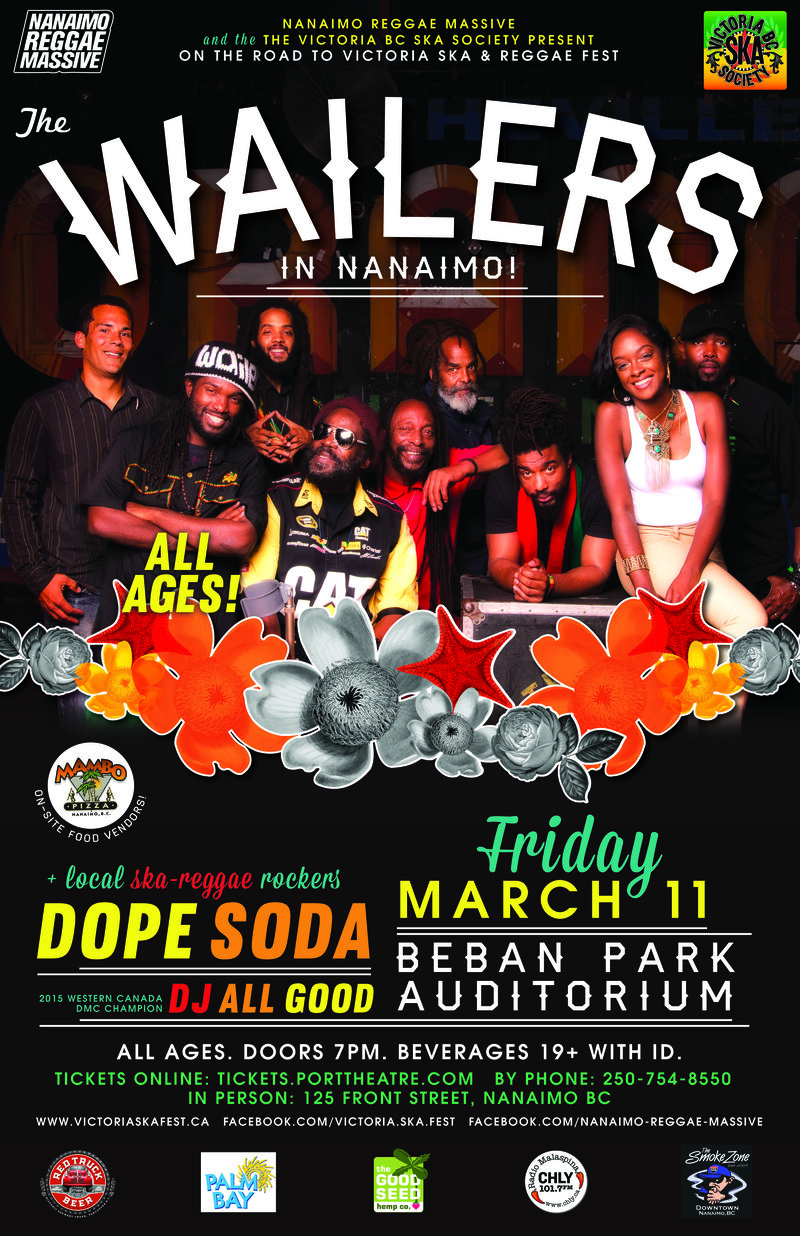 Event Archive - THE WAILERS IN NANAIMO - REGGAE ON THE ISLAND (All Ages): The Wailers, Dope Soda, DJ All Good

Fri. March 11th 2016 @  Beban Park Auditorium Nanaimo BC (All Ages)
7pm
$29.50 - $32.50
Tickets at: The Port Theatre
Presented by: Nanaimo Reggae Massive , Victoria BC Ska and Reggae Society
Nanaimo Reggae Massive and Victoria BC Ska Society are proud to present THE WAILERS for the first time in Nanaimo at Beban Park Auditorium on Friday, March 11, 2016. Bringing The Wailers to Nanaimo has been a long time in the making and we are so happy that we can offer this concert ALL AGES to the Island!

Together with Bob Marley, The Wailers have sold over 250 million albums and have played to an estimated 24 million people across the globe performing an average of 200 dates a year. The anchor of the band is Aston “Family Man”Barrett, who in addition to being Marley’s most trusted lieutenant and co-producer, played on countless other classic reggae hits throughout the seventies. The authenticity he brings to the Wailers’ sound is indisputable and yet today’s line-up combines old school know-how with lead vocals from one of Jamaica’s most exciting new singers. The Wailers are undoubtedly the world’s premier reggae and world music group who bring high energy shows to fans across the globe.

Outside of their groundbreaking work with Marley, the Wailers have also played or performed with international acts like Sting, the Fugees, Stevie Wonder, Carlos Santana, and Alpha Blondy, as well as reggae legends such as Peter Tosh, Bunny Wailer, and Burning Spear. As the greatest living exponents of Jamaica’s reggae tradition, the Wailers have completed innumerable tours, playing to a fan base that continues to grow and expand as new generations of fans are exposed to the music.