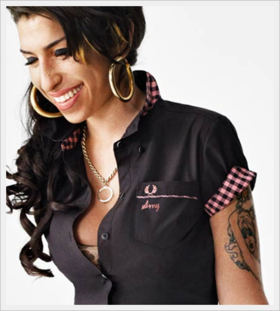 Fri. January 29th 2016 @ Lucky Bar Victoria BC (No Minors)
9:30pm
$14.50 advance
Presented by: Victoria BC Ska and Reggae Society
Victoria BC Ska Society is excited to present an ALL STAR HOUSE BAND featuring members of The Ballantynes, Yukon Blonde, Chance Lovett & The Broken Hearted, The Valuables & Sh-Shakes with, Boomshack and Young Royal of Boss Takeover for a night in honour of Amy Winehouse. Why Amy? Well in the short time Amy Winehouse was alive she managed to bring music that captured the hearts and ears of fans spanning from R&B, jazz, soul, ska, reggae and pop. She was the kind of artist that any song she would sing would be revered from fans of several genres.

While Amy Winehouse's love for R&B was her main influence she was also a close friend of the ska and reggae genres and some of its most revered creators. She created songs in her repetoire that covered legends such as Toots and the Maytals and appeared on live performances with The Specials. She also had close ties to Damian Marley and before she died had plans to collaborate with him on future recordings.

This show on Friday, January 29th at Lucky Bar will aim to capture the spirit of Amy Winehouse in all her various colours. The Ballantynes w/Chance Lovett (formerly of The Chantrelles and now with Chance Lovett & The Broken Hearted) and Boomshack's musical styles capture the spirit and energy of Amy Winehouse that will do this show justice. Young Royal of Boss Takeover will perform interludes before, in between and after the sets.

Boomshack will perform mostly original music mixed with some Amy Winehouse songs and then The Ballantynes w/Chance Lovett will round out the night with an all Amy set!

Soul/Regage from Vancouver BC
© 2023 Victoria BC Ska & Reggae Society