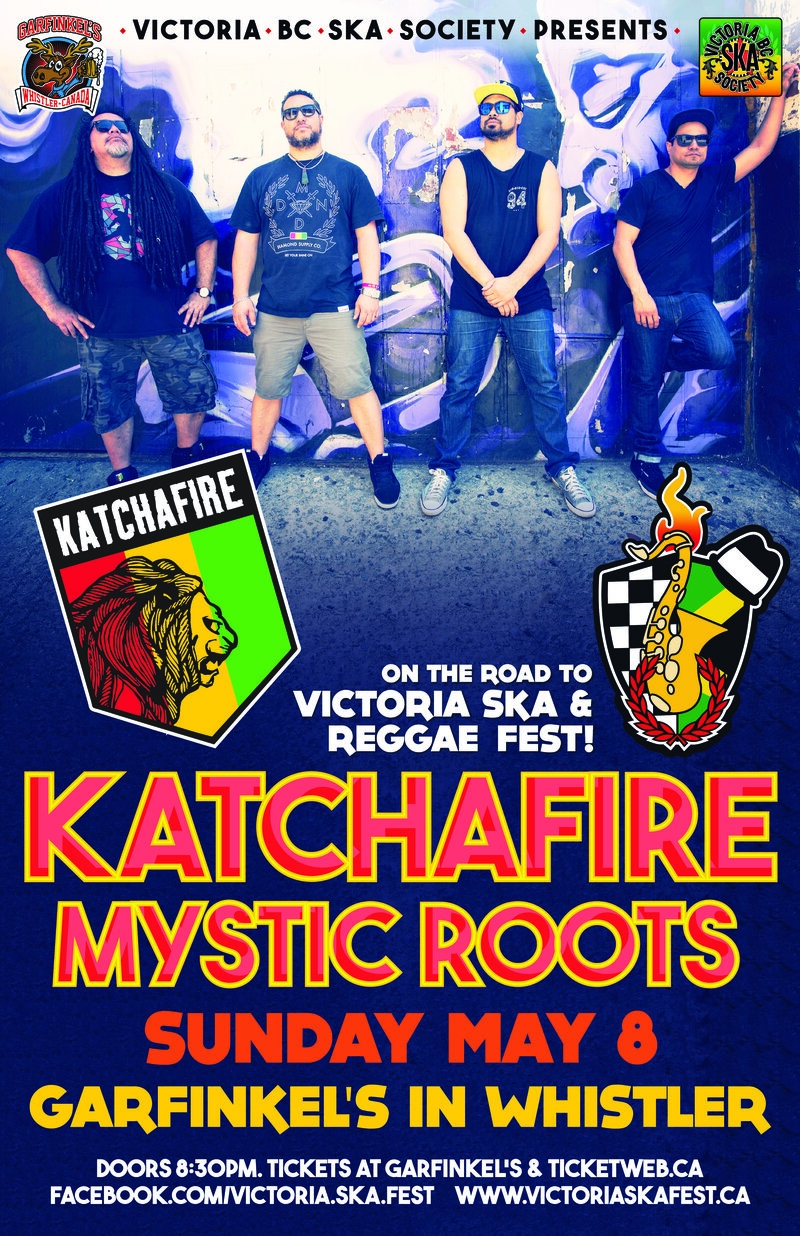 Sun. May 8th 2016 @ Garfinkel's (Whistler) Whistler BC (No Minors)
8:30pm
$25 - $27.50 *(VBCSS Members' On the Road to Victoria Ska & Reggae Fest Early Bird Special $22.50 for a limited time)
Tickets at: Ticketweb, Garfinkel's (Whistler)
Presented by: Victoria BC Ska and Reggae Society
Victoria BC Ska Society is excited to present yet another unforgetable On the Road to Victoria Ska & Reggae Festival experience when Hamilton, New Zealand's Maori reggae warriors KATCHAFIRE return to Whistler. Katchafire are no strangers to our community. It was in 2010 that an on-going partnership formed when the band came and did a west coast swing that saw them do shows in Vancouver and Whistler in support of one of the headlining spots at Victoria's 11th Annual Ska Festival at Ship Point Inner Harbour. The band returned in 2012 and headlined at Ship Point Inner Harbour again with Leroy Sibbles of The Heptones and others. Their last Canadian west coast appearance was in 2013 at Victoria's 14th Annual Ska Festival where they played to a packed venue alongside David HIllyard & the Rocksteady 7.

Now on a west coast tour we are once again excited to welcome them back to Canada.

Four highly succesful studio albums, mulitple awards, platinum sales, highest selling singles, and the list goes on.. Their sound is built on the foundations of classic roots reggae with an R’n’B and funk rub, mashing modern dancehall and slinky reggae pop. Katchafire has crafted a universal vibe, capturing something truly special in a diversity of instrumentation and clarity of sound.

Built on a family movement, It all started when lead guitarist Grenville Bell, father of Lead Singer Logan Bell & Drummer / singer / songwriter Jordan Bell, moved into an apartment building in town with his then teenage sons where they could make music all night, and the rest is history.. Countless jams and sell out concerts later they are now an 8 piece collective of multi talented songwriters and musicians and have become a staple on the Californian and Pacific Roots scenes. The fire just continues to get hotter following invitations to acclaimed events such as Glastonbury, opening circuits through Europe, Portugal and Brazil, as demand continues to grow for the non-stop feel good vibe of their incredible live shows.
Their popularity and critical acclaim has seen them share the stage with artists from Damien Marley, Steel Pulse, UB40, The Wailers, to Michael Franti and Spearhead and many more.. They've garnered respect from the likes of Don Letts (acclaimed documentary maker and Clash tour DJ), music journalist David Katz, and have been championed on the airwaves by radio legends such as Steve Barker (BBC), Charlie Gillet (BBC) and David Rodigan (Kiss FM and others)..to name a few of a very long list.

MYSTIC ROOTS
Mystic Roots also known as the backing band for the legendary Pato Banton. With two feet solidly in reggae, the band seamlessly juggles elements of dancehall, Hip-Hop, EDM, pop, and a taste of rock. The band is always sharpening their evolving musical arrangements of vocal harmonies that are made richer by the groups’ female/male dynamic. The music and lyrics are catchy and upbeat, yet with a powerful, positive message.