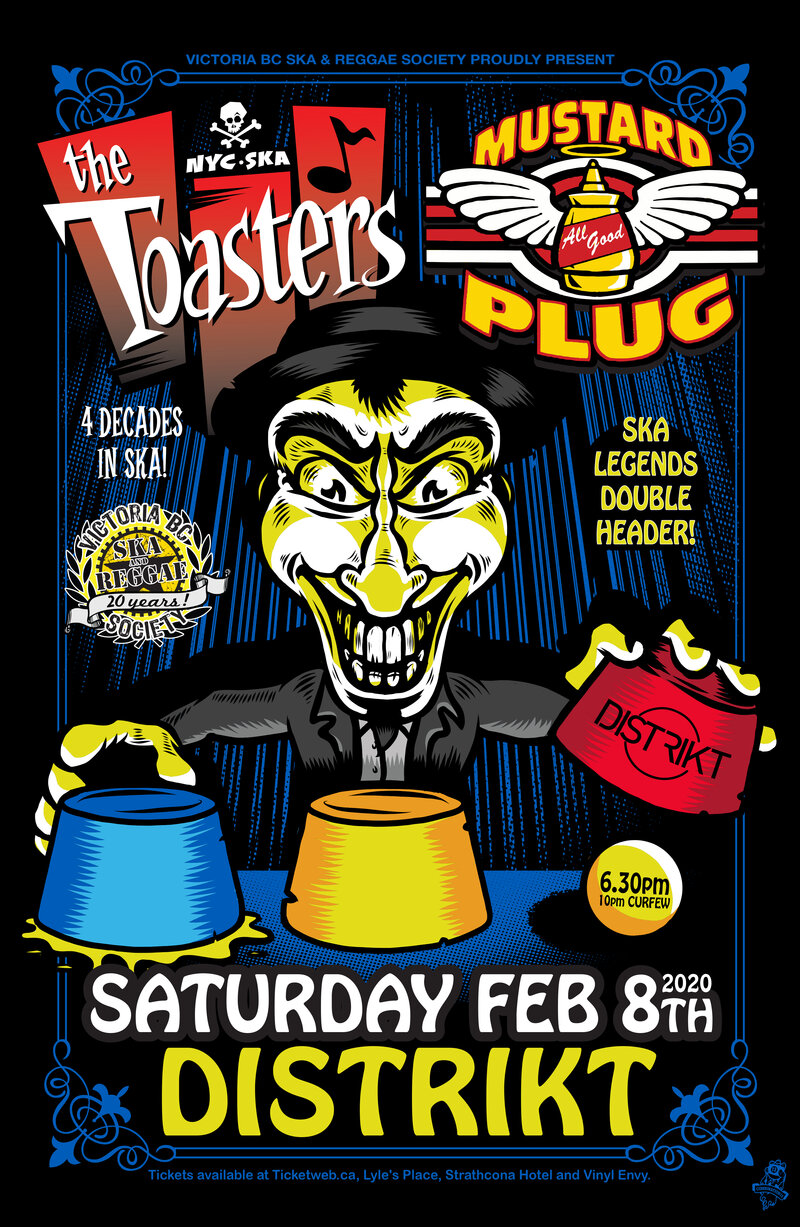 Sat. February 8th 2020 @ Distrikt Victoria BC (No Minors)
6:30
$17.50 - $20 advance
Tickets at: Lyles Place, Vinyl Envy
Presented by: Victoria BC Ska and Reggae Society, Victoria Ska & Reggae Festival
To all our true SKA lovers far and wide! We've heard your calls and we've got an incredible double-headliner bill to help blast away the last little bit of the cold and get you warmed to your core! Two of the most legendary ska bands the United States has ever produced, THE TOASTERS and MUSTARD PLUG both return to Victoria for what promises to be a truly unforgettable show.

It's been 12 long years since New York ska icons The Toasters landed in Victoria and we are beyond stoked to welcome them back as they celebrate four decades of skankin' success. Noted as “America's first two-tone band,” The Toasters have been at the vanguard of the American ska movement since the very beginning. Long established as one of the most influential bands in the genre, they've won fans the world over, staying consistently relevant with their unique blend of ska - incorporating reggae, punk, jazz and soul. From their humble roots on Lower East Side NY roots to an endless bounty of shows around the globe (Now numbering over 4000), the band has repeatedly defied critics, and nay, gravity itself! After four decades, The Toasters are as strong as ever and are coming to lay down a career-spanning set that celebrates everything this legendary band has built along the way.

Joining The Toasters for this very special night are dear old friends, MUSTARD PLUG! No slouches on the ska scene themselves, Mustard Plug has been delivering the goods for more than 25 years now. The last time they appeared in Victoria, Mustard Plug rocked the main stage at Ship Point during Victoria's 16th Annual Ska & Reggae Festival in 2015. Albums like “Evildoers Beware” and “Pray For Mojo” are classics among ska devotees, not to mention their crowd-funded 2014 album “Can't Contain It,” a true ode to the community that's helped them maintain their position as elder statesmen of the ska scene. Staying true to the DIY ethics of the bands that inspired them (Including their bill mates, The Toasters!), Mustard Plug has remained beloved by skankers wherever they go and it is undeniable that the band surpassed any expectations placed on them, staking their claim in the pantheon of modern Ska. Please, for your own sake, DO NOT miss this incredible double-bill of legendary, serious ska sounds.