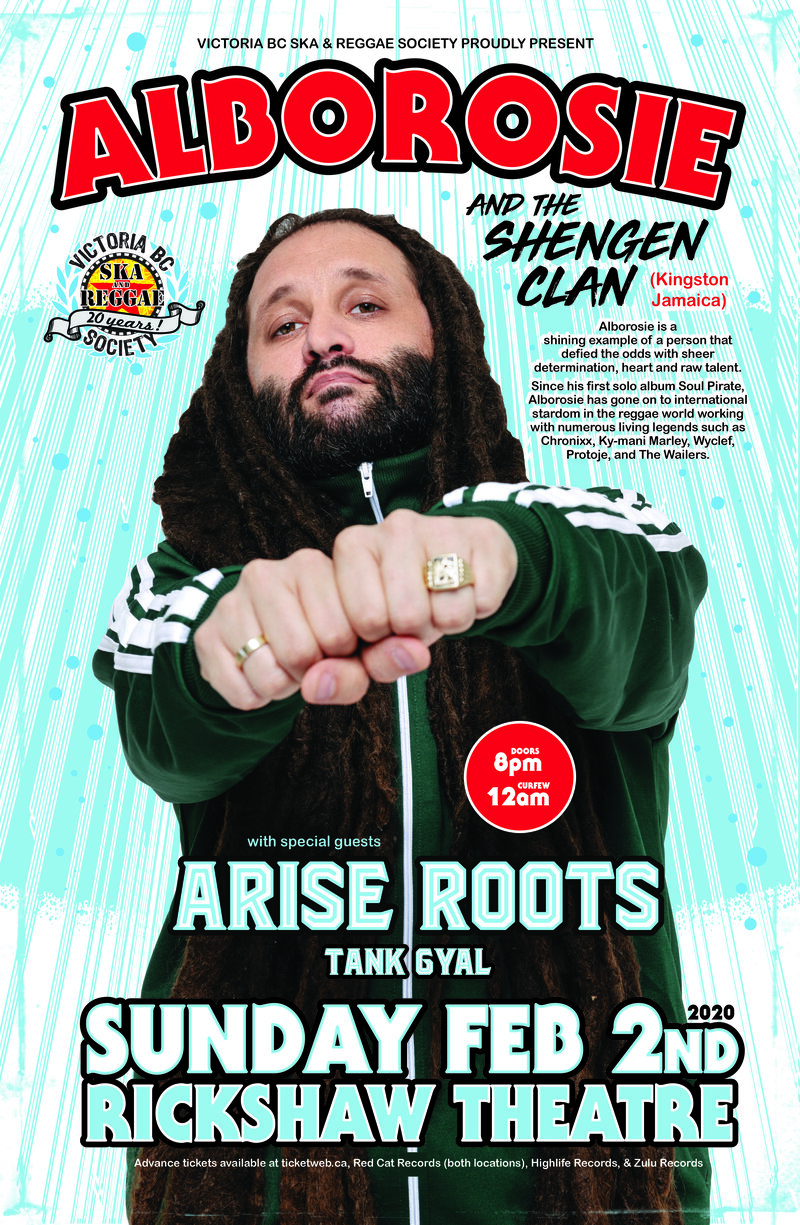 Sun. February 2nd 2020 @ Rickshaw Theatre Vancouver BC (No Minors)
8pm - 12am
$27.50- $32.50 advance
Tickets at: Red Cat Records, Highlife Records, Zulu Records
Presented by: Victoria BC Ska and Reggae Society
After ten years in the making, Victoria BC Ska & Reggae Society is proud to announce the confirmation of Alborosie & Shengen Clan to Vancouver for the first time on Sunday, February 2, 2020 at Rickshaw Theatre. This will be the band’s first ever Canadian appearance.

Tickets on sale here on Friday, November 22 at 9am.

Alborosie is a shining example of a person that defied the odds with sheer determination, heart and raw talent. Born in Marala, Sicily, Alberto D'Ascola is a versatile musician that plays guitar, drums and keyboards in addition to being a world renowned singer and living legend.

He was first a part of a successful Italian reggae band called “Reggae National Tickets” in the early 90s. After almost ten years with that band his love for reggae and desire to be closer to the Rasta culture, brought Alborosie to the Island of Jamaica, in 2001.

While in Jamaica despite being first tagged with the name “Borosie,” (a name with a negative connotation) D’Ascola used the skills and experience he built prior to his arrival to work as a sound engineer with artists such as Ky-mani Marley and Wyclef. In tandem working with those artists, Alborosie launched his solo career. Long after moving to Jamaica Alborosie said in an interview, “I never came here to be popular. I never wanted to top the charts or be a billionaire. I don’t care about that. I just wanted to be close to the music that I loved and that I couldn’t find in Italy.”

Alborosie’s first solo album Soul Pirate in 2008 received international acclaim and rose to the top ten on the reggae Billboard charts. The anthem “Kingston Town” off that album is still the most popular song Alborosie has to this day. Since Soul Pirate, Alborosie has gone on to international stardom in the reggae world working with numerous living legends such as Chronixx, Sizzla, Protoje, Gentleman and The Wailers.

In fact his recent release in 2018 called Unbreakable: Alborosie Meets the Wailers United was one of the singer's best-received albums to date, featuring collaborations with J Boog, Jah Cure and of course members of the Wailers. The album rose to the Top Ten of Billboard’s reggae charts.

The confirmation of Alborosie with his band “the Shengen Clan” in Victoria BC is a special milestone for Victoria BC Ska & Reggae Society and for reggae fans throughout Western Canada.

Supporting Alborosie & The Shengen Clan is LA's roots reggae party rockers ARISE ROOTS. This will be only Arise Roots' second Canadian appearance after their first Canadian debut at Victoria's 16th Annual Ska & Reggae Festival supporting New Zealand's House of Shem. Anyone that has had the opportunity to see ARISE ROOTS know they're a root reggae fan's paradise.