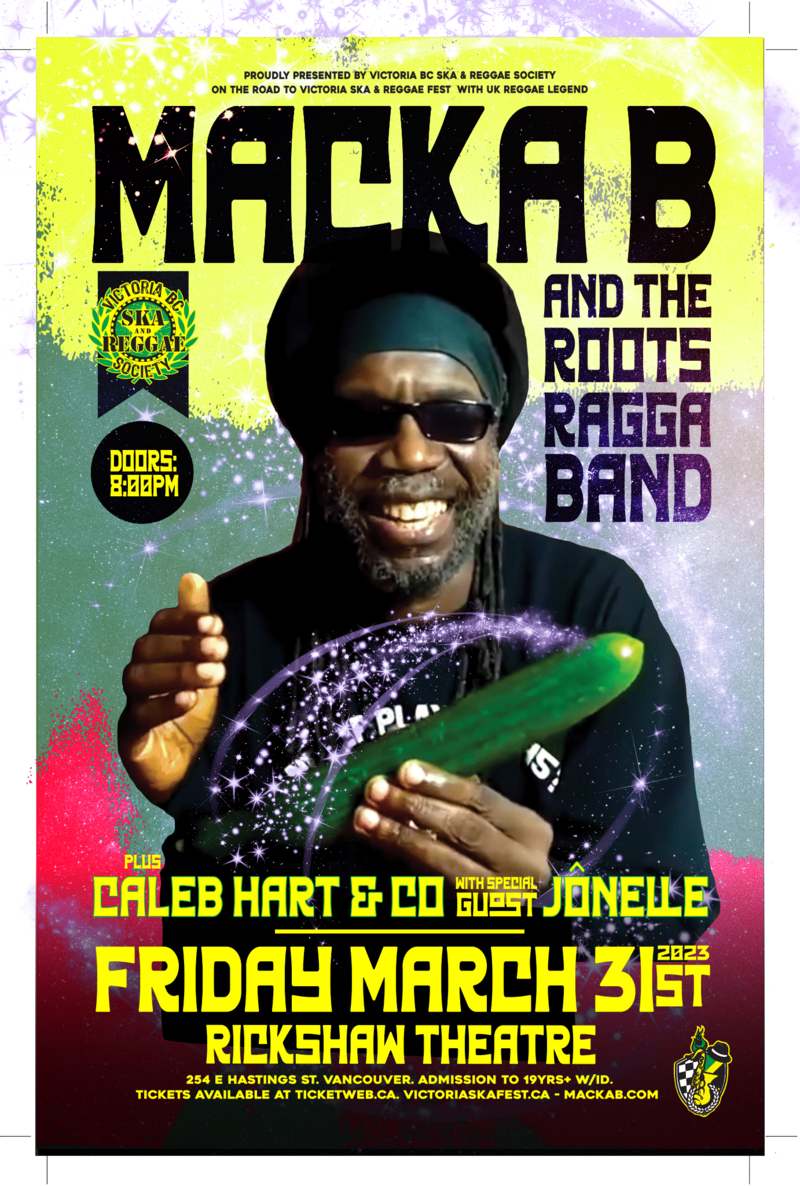 Fri. March 31st @ Rickshaw Theatre Vancouver BC (No Minors)
20:00
$26.50 - $32.50 On sale now  Buy Tickets Online
Presented by: Victoria Ska & Reggae Festival, Victoria BC Ska and Reggae Society, Victoria Ska & Reggae Broadcast System
We are so excited to kick off spring and the Road to Victoria's 24th Annual Ska & Reggae Festival as we welcome back to the west coast a true titan of reggae music, MACKA B & THE ROOTS RAGGA BAND, for a very special run of shows. One of the most legendary toasters in reggae music for nearly four decades, Macka B has used his incredibly unique voice and powerful music to to push dancehall music back to Rastafarian consciousness, while tending to other branches of the reggae tree like dub, roots reggae and lovers rock. Macka B possesses one of the richest voices in reggae music, balancing gentleness and ferocity in every performance. His vast, expansive catalogue of records stands as a testament to his massive lyrical prowess, displaying a remarkable ability to move between serious and more lighthearted subject matter in a way few other artists can. His ongoing “Medical Mondays” series on YouTube, promoting health and wellness, has brought him to a whole new audience outside the reggae world. With a stage presence to match his legendary output, Macka B & The Roots Ragga Band always put on a special show that all music lovers, not just reggae heads, are sure to enjoy.

Joining Macka B for this run of shows is one of the west coasts shining stars of reggae, CALEB HART, who will be bringing his friends to back him and his very special guest, reggae songstress, Jônelle. One of the coolest, most dynamic voices on the coast, Trinidad & Tobago native Hart can shift between gorgeously smooth lover's reggae to grimy dancehall vocals seemingly in the blink of an eye. A keen, sharp songwriter, Caleb Hart sings songs of love, struggle, joy and pain – in short, Caleb Hart is a captial-R Reggae soldier. It doesn't take long to see why Hart quickly became such a revered, in-demand musical voice on the west coast. He and his band will be joined by singer, songwriter, producer Jônelle for a very special collaborative performance, highlighting the incredible strengths of both artists and showing how strong Canadian reggae is. Come join us as we celebrate the immense power of reggae music with these very special shows!