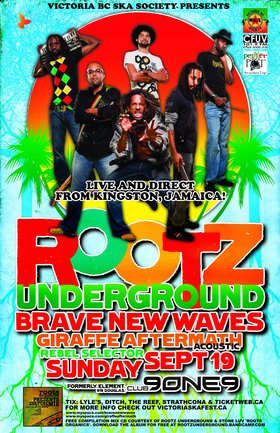 Rootz Underground had such an awesome time at Bob Marley's 65 Jubilee Celebration, they've decided to come for a second helping this Sunday, September 19th at Element!

Since that memorable night back in February 2010 (flying in at the last minute direct from Jamaica after the band's US Visa was denied) ROOTZ UNDERGROUND have been on a tear of Jamaica, North America and Europe playing all over France, Poland, Italy, Switzerland & Greece. Notably the band also played on Reggae on the River's most recent sold out edition in July of 2010.

The momentum of their song "Power for the People" made for uplifting the people of Haiti combined with the success of their most recent album "Movement" which helped thousands of people in Greece get through their most recent economic collapse has had people in the world-wide reggae community and beyond talking about the band in a most positive light.

And if you thought you were impressed by those recent developments, the band has even more exciting news. Just after their appearance at Reggae on the River this summer, Rootz Underground and Rory from Jamaica's hypest and most legendary sound crew - Stone Luv released and are featured on one of the greatest conscious roots reggae and dancehall compilation albums in recent memory. The CD compilation titled "Roots Organics" features some of the world's greatest reggae heavyweights (and their counterparts) such as
Luciano, Damian Jr. Gong (w/Nas), the late great Sugar Minott, Ritchie Spice, Lutan Fyah, Anthony B, Sizzla and more.

Supporting ROOTZ UNDERGROUND on this to be epic show will be Brave New Waves who have come off a busy summer schedule playing Victoria's 11th Annual Ska Festival alongside bands such as Fishbone, The Black Seeds and Cherry Poppin' Daddies + being active all over Vancouver Island and the Lower Mainland.

Long time no see reggae outfit GIRAFFE AFTERMATH will be playing a special acoustic performance as well. GIRAFFE AFTERMATH'S acoustic shows carry a special feeling and sound reminding us why the next time they come we'll be even more excited to see the band in its entirety.

Nanaimo's REBEL SELECTOR will round out the bill playing the very best in reggae, dancehall and Latin grooves.

from Nanaimo BC
© 2022 Victoria BC Ska & Reggae Society