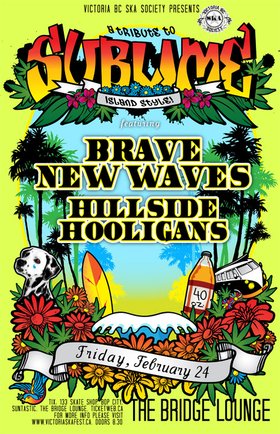 Fri. February 24th 2012 @  The Bridge Lounge Courtenay BC (No Minors)
9:30pm - 12am doors at 8:30pm
$10+ adv. early bird/$15+ reg adv.
Tickets at: Ticketweb, Bop City
Presented by: Victoria BC Ska and Reggae Society
Victoria's Brave New Waves and Hillside Hooligans take the long awaited Tribute to Sublime Island Style mini tour to the Comox Valley for a date at The Bridge Lounge in Courtenay BC! Tickets on sale shortly at Bop City and ticketweb.ca!

It was almost four years ago that Kiltlifter Dave's idea to host a Tribute to Sublime concerts on the Island finally came to fruition here on the Island. It was mentioned time and time again. The motivation to do the shows was also inspired by the fact the Victoria BC Ska Society hosted Long Beach Shortbus at Victoria's 6th Annual Ska Festival in 2005. That was a historic show for sure because a similar line-up that was called Shortbus then is now called Sublime with Rome.

That said, one band that reggae/ska lovers all over BC love is Sublime. And we think a great way to celebrate it is to have bands from Victoria, and Vancouver do it in their own style.

Island bands, Brave New Waves and Hillside Hooligans will lead the Tribute to Sublime Island Style torch bringing the mini tour twice to Victoria and Vancouver (both cities will host one bar show and one all ages show) plus special shows (19+) in Nanaimo and Courtenay BC respectively.

Other bands that will be playing along with them include Victoria's Step Back Dave and Tuff Jelly + Vancouver's reggae/dub powerhouse Giraffe Aftermath and Maple Ridge BC's punk kings The Wrecktals.

(before the shows sell out).

This stands out as one of the best memories in recent years for a lot of ska/reggae/punk fans and mainly just good ol' Sublime fans that come in all ages, shapes and sizes. Don't miss out!!

Born on the wicked and wild west coast of Vancouver Island, British Columbia, on a sandy beach amongst breaking surf and torrential spring downpours, looking forward to the months of endless sunshine to come , five friends feeling very blessed to live in the tropics of Canada all with a passion for Reggae, Ska, and Surf music with its own unique Va... more info
Audio: THC, Supermodel, My Coastline