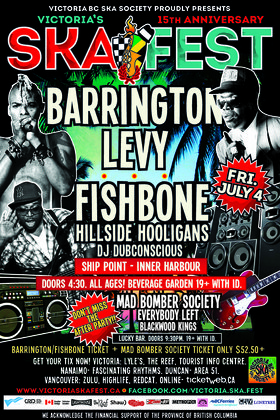 Music fans, rejoice! This night will bring Victoria the best in reggae, ska, punk, funk, and more. From the sweet reggae tunes of Barrington Levy to the manic and soulful sounds of Fishbone, this show offers something for everyone. Local boys, The Hillside Hooligans, will knock it out of the park with their own mix of reggae and rock and Dubconscious will get the party started with an eclectic mix of jungle, drum 'n' bass, and reggae.

Barrington Levy & Detour Posse
From his work with more mainstream artists like Rascalz, Snoop Dogg, and Shaggy to his own catalogue of chart-topping hits, no one artist can represent a genre like Jamaica’s Barrington Levy. Starting his music career before the age of 15, Barrington Levy’s early work with the Roots Radics established him early on as a musical powerhouse to watch. Hits like “Under mi Sensi,” “Black Roses,” and “Broader than Broadway” have made Levy a worldwide name and is known for being one of the finest performers of dancehall and reggae music. Levy has over two-dozen albums to his name, and shows no sign of slowing down. For those who want to see one of the masters, look no further than Barrington Levy.

Fishbone
Fishbone first hit the Victoria Ska Fest in 2005 with an unforgettable performance at the Victoria Curling Club. Partying until the lights came on and speakers turned off, they were certainly an act to see. The group has been around for over 25 years and have been one of the largest influences of ska, punk, and funk bands today. The band formed in 1979 in LA, California. They’ve always been a band with an amazingly eclectic sound, biting social commentary, and hyperactive stage presence. They made their return to Victoria in 2010 to play alongside The Black Seeds and Cherry Poppin’ Daddies, and they once again gave us an unbelievable performance. Now that they’re back, we can’t wait to see what they bring us!

Hillside Hooligans
The Hillside Hooligans were born from the ashes of Victoria’s favourite reggae punks, One Drop. Not only does the group have years of performance experience between them, but are avid promoters of ska here on the island and abroad. They’ve been jamming, performing, and causing general mayhem for a few years and have recently finished work on their brand new album. Expect their set to be full of raw punk energy, massive reggae rhythms, and beer-fuelled chaos.

DJ Dubconscious
DJ Dubconscious has come to represent both the east and the western coast of Canada. Born in Toronto & raised on the jungle & drum’n’bass sounds permeating the city in the late 90s & early 2000s, he developed a taste for hard beats drenched in reggae vibes. has appeared at numerous music festivals including BC's Shambhala, Bass Coast, Diversity, He curates a Sunday night weekly at The Keefer Bar in Vancouver, and was also running an all-vinyl reggae & dancehall weekly, Wax Wednesdays, up until the Waldorf Hotel's unfortunate closure.

Reggae / Ska / Punk from Victoria BC