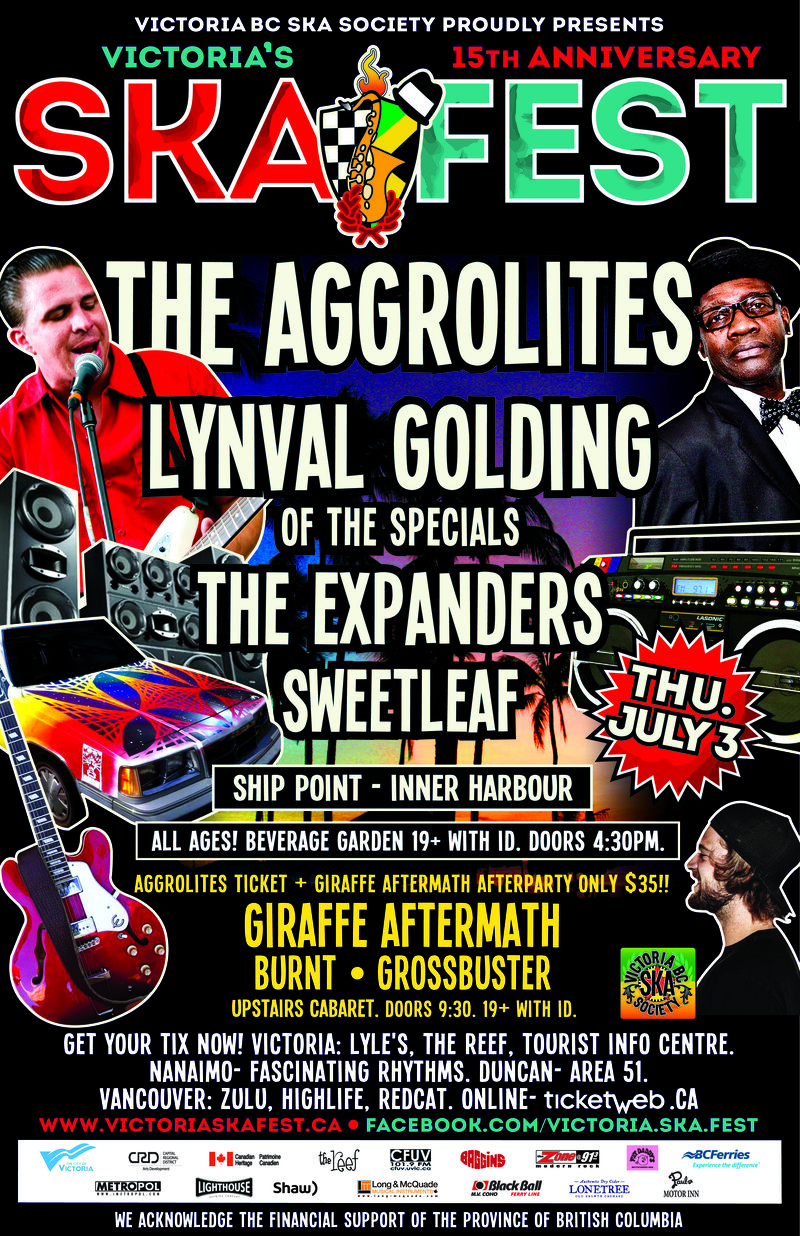 Thu. July 3rd 2014 @ Ship Point (Inner Harbour) Victoria BC (All Ages)
5pm - 10pm doors at 4:30pm
$18.50 - $35
Tickets at: Lyles Place, Ticketweb, Tourist Information Centre, The Reef
Presented by: Victoria Ska & Reggae Festival, Victoria BC Ska and Reggae Society
Now THIS is what we're talking about! The Aggrolites will be performing with the legendary Lynval Golding of The Specials. Joining them will be California's Expanders. For fans of groups like The Gladiators and the Ethiopians, The Expanders will get you moving and grooving. Rounding out the evening are local funk/ska kings, Sweetleaf. Come on down and enjoy a legendary night of Victoria's 15th Anniversary Ska Festival! Victoria, you've never had a better time than when you're dancing at Ska Fest.

The Aggrolites
Hailing from LA, The Aggrolites are once again back at Victoria’s Ska Festival to play some Dirty Reggae. Taking the best of old and new, The Aggrolites have taken audiences worldwide on a musical stampede of ska, skinhead reggae, soul, and funk since 2002. What started as a live backing band for Derrick Morgan has since become one of today’s best ska and reggae groups. They have appeared on the children’s show Yo Gabba Gabba! as well as providing instrumental support for Rancid’s Tim Armstrong on his solo album, A Poet’s Life. Lynval Golding, of The Specials, will be joining The Aggrolites onstage for this performance, making it a Ska Fest performance that should not be missed.

The Expanders
Since 2003, The Expanders have been performing a rootsy mix of reggae and rocksteady music. From sunny South California, The Expanders play in the style of such classic groups like The Ethiopians, Culture, and The Mighty Diamonds. An emphasis on strong vocal-harmonies and catchy tunes, The Expanders are the perfect fit for our own sunny festival. The old Kingston sound is well and alive and ready to kick it at Victoria’s 15th Annual Ska Festival.

Sweetleaf
Victoria’s own Sweetleaf play an amazing mix of ska, reggae, and funk. They’ve played with Mad Caddies, Ill Scarlett, and played at last year’s Ska Festival with The Debonaires and The Revivers. Those who love to dance should check this group out. They’ve now established themselves as one of Victoria’s go-to groups for high quality ska and reggae.

Lynval Golding (Of The Specials)