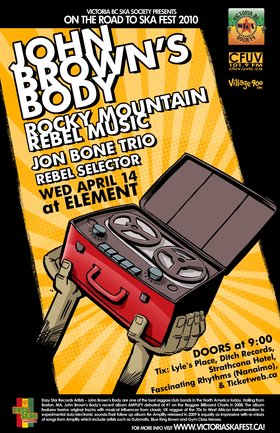 Easy Star Records Artists – John Brown’s Body are one of the best reggae/dub bands in the North America today. Hailing from Boston, MA, John Brown’s Body’s recent album AMPLIFY debuted at #1 on the Reggae Billboard Charts in 2008. The album features twelve original tracks with musical influences from classic UK reggae of the 70s to West African instrumentation to experimental dub/electronic sounds.Their follow up album Re-Amplify released in 2009 is equally as impressive with re-mixes of songs from Amplify which include artists such as Dubmatix, Blue King Brown and Gym Class Heroes.John Brown's Body will coming to Victoria for the 1st time after being stuck in the snow in Tacoma last time they tried to make it up in December 2008.

Since the summer of 2008 Rocky Mountain Rebel Music and has evolved to include 10 musicians from across Canada. This Diverse collective talent accounts for the band's high energy and full sound as well as its broad range of musical influences. Charged by Reggae, Rock, Funk, Dub, Dancehall, Punk and Worldbeat, Rocky Mountain Rebel Music delivers an original sound that defies comparison. Catch one of the most anticipated home coming appearances by one of Victoria's favourite reggae/rock/funk/dub/ska bands! Notably RMRM are masters of bringing the ska/reggae community together hosting (often spontaneous or unannounced until the last minute) big parties and events throughout the year keeping the scene strong.

Jon Bone & the Karuna Movement is a Jam band laying down a mix of reggae, funk, and world grooves and coloring them with catchy melodies and deep lyrical content.They groove on a nice balance of tunes with free form, improvized jams.

When you join them, come ready to dance!!!

Jon Bone has played on numerous large events and festivals throughout British Columbia and worked closely with Ibo (from Ibo & Kindred Band). Recent shows include playing alongside Delhi 2 Dublin @ Lucky Bar last year and Rootz Underground at the Port Theatre in February 2010.

One of the movers and shakers of the Nanaimo reggae massive - Rebel Selector specializes in selecting some of the best in roots, dancehall and Latin riddims. He'll keep the vibe strong all night anytime you don't hear one of these awesome aforementioned bands.