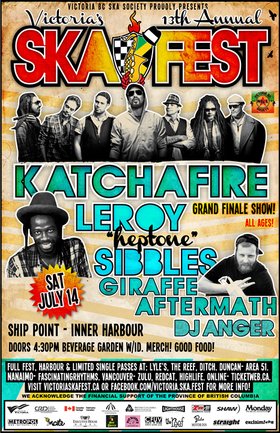 After KATCHAFIRE appeared at Victoria's 11th Annual Ska Festival back in 2010 the band has grown irresistably on the Island ska/reggae massive. Katchafire are one of New Zealand's greatest reggae bands.

Katchafire are an all Maori reggae band from Hamilton, who have achieved phenomenal success over the last few years. Their debut album, the prophetically named Revival release by Mai Music, has sold in excess of 45,000 copies with Giddy Up being the biggest selling single of 2003. 2004’s follow up, Slow Burning, was similarly well received, selling 20,000 copies in the first week of release.

LEROY "HEPTONE" SIBBLES is a living legend whose has brought more to ska/rocksteady/reggae than many artists have done in a lifetime.

He was the lead singer for The Heptones in the 1960s and 1970s. For this performance he will be backed by Vancouver's Natural Flavas.

In addition to his work with The Heptones, Sibbles was a session bassist and arranger at Clement 'Coxsone' Dodd's Jamaica Recording and Publishing Studio and the associated Studio One label during the prolific late 1960s, and was described as "the greatest all-round talent in reggae history" by Kevin O'Brien Chang and Wayne Chen in their 1998 book Reggae Routes.[1]

Leroy Heptone Sibbles will be giving an exclusive key-note address at the Victoria Ska Festival. Times are TBA. Please log on to http://www.victoriaskafest.ca for updates.

Vancouver's Giraffe Aftermath are impressing audiences throughout BC with their unique style that pleases reggae fans that enjoy both classic and more contemporary reggae styles. Giraffe Aftermath will be making their 2nd straight appearance on the festival. The band has also played alongside names such as Katchafire, John Brown's Body and Shane Philip.