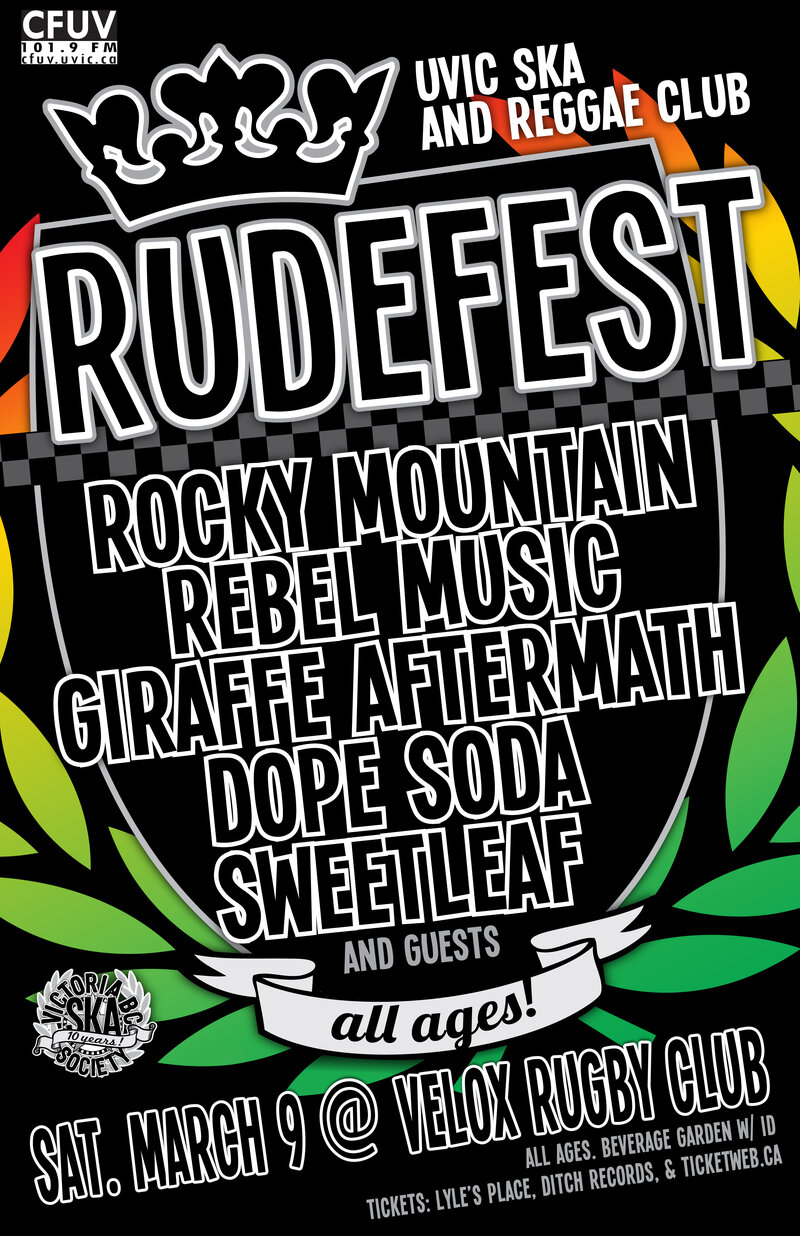 It’s taken 4 years for the 9-piece ska-funk-reggae mash-up known as Rocky Mountain Rebel Music to get to where they are today, and they have been busy. The numbers don’t lie, with over 100 live performances, 5 Canadian tours and 2 albums, RMRM has put in the ground work to establish a live show worth talking about and a crew of committed fans that keep coming back.

RMRM have been voted “Victoria’s Favorite Band” by Monday Magazine as well as The Zone FM's band of the month. Also their versatility in sound has given them the opportunity to share the stage with popular acts such as Ky-Mani Marley, Gramps Morgan, The Aggrolites, John Brown’s Body, Kyprios, and The Black Seeds. Legendary ska label Stomp Records also jumped at the chance to include their single “Man Down” on their “All-Skanadian Vol.4” compilation disc.

Lastly, RMRM has also proved to be a sought-after artist for Western Canada's Festival Circuit, appearing at Shambhala, VIC Fest, Calgary Reggae Fest, Kealoha, and of course The Victoria Ska Fest. Let's go ahead and add Rudefest to that list.

Building on the traditions of reggae and dub music, Vancouver's Giraffe Aftermath use hip-hop rhythms and a psychedelic approach to create a unique blend of lively, dance-able music.
Formed in 2006 by Steve Hackenbruch and Luke de Villiers, this songwriting/production duo remains the core of the band's music. Joined on stage by Paul Steffes and a revolving cast of peripheral players, Giraffe Aftermath throw down a foundation of groove and airtight vocal harmonies.

They are also set to take on the west coast of the United States for a Spring Tour, so Rudefest is an opportunity to show them how much they're loved here before they make the journey south. http://www.facebook.com/giraffeaftermath

Thirsty for music that is both dangerous and danceable, refreshing as a mojito and as eye-opening as a whiskey sour? A cocktail party mix of reggae, punk rock, jazz, hip-hop, and ska? This is Dope Soda.

Dope Soda formed in late 2011, a fresh concoction of six of the top jazz, rock, and Jamaican-music-inspired musicians from Vancouver Island, with membership in acts such as Current Swell, Rocky Mountain Rebel Music, The Bananafish Dance Orchestra, The Kiltlifters, and Kings Without.

The band is led by a three-piece horn section with roots in the highly-regarded Vancouver Island University Jazz Department, buoyed by a funky rhythm section that serves up sips of bubbling Hammonds and Wurlitzers, shots of distorted guitar, and heavy bass... in your face.

Dope Soda jumps back and forth between reggae jams, punk rock assaults, happy ska romps, and hiphop throwdowns--a thirst quencher for audiences who need good rhymes and good times.
So: tip back a cold one, tip back a bold one, tip back a Dope Soda and uplift your rocking, rolling soul.

These cats describe their music as influenced by Ska, Jazz, Reggae, Funk, and party rock. “It’s tough to categorize us,” says vocalist, Chris Jones. With songs that include African beats on the way, Sweet Leaf incorporates a variety of styles. Though many of their songs have a strong ska feel, “You don’t have to be a hardcore ska fan to like us” says Chris.

The band was formed in November of 2011 after Chris responded to an add on Craigslist. Chris was even able to bring up the first e-mail between himself and the band. “these guys put out an add for a ska vocalist and guitarist,” says Chris, and that’s how it all started.

One of the newer bands in Victoria's scene, we're stoked to have 'em on board. Put your dancin' shoes on.

There also may be some surprises. Stay tuned!

This event is proudly brought to you by The Victoria Ska Society and the UVic Ska and Reggae Club.

Reggae/blues from Victoria BC
© 2023 Victoria BC Ska & Reggae Society